On the return of the Super League after the Excitement and drama of the World Cup, Guangzhou’s first match back was against Dan Petrescu struggling Guizhou Hengfeng. This article will look at the tactics of both sides with a bit of statistical analysis as well. Hopefully it can highlight the areas in which Guizhou struggled, as well as potential advice for teams who come up against a side with Evergrande tactics. 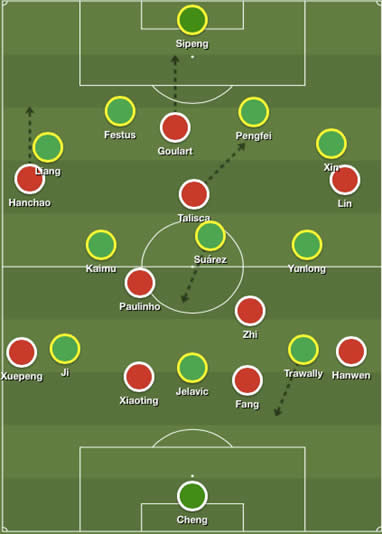 Gaps in the structure

As seen in image above, the Guangzhou midfield double pivot of Paulinho and Zhi who regularly ventured forward. Given that Hengfeng were playing with a 3 man midfield, this left Evergrande short of numbers in the middle of the park. It was aligned by Talisca dropping to create passing options. 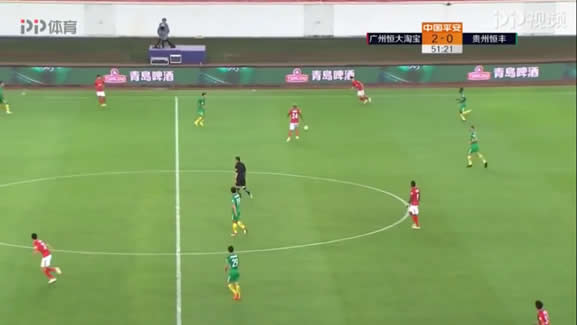 [Image above – Space & time found by Talisca in the “Half Space”]

In addition to leaving Hengfeng playing long vertical passes to Nikica Jelavic situated high up the pitch, resulted in a disjointed team with enormous gaps between the three stages of the team. This approach meant that Evergrande could effectively press the opposition in their half.

This effective positioning structure from Evergrande meant that they often won the ball back quickly to start numerous attacks. Anderson Talisca was particularly effective due to the Hengfeng broken structure finding so much space [seen below] due to the gaps in the away team.

Here’s an example of Talisca Isolation: 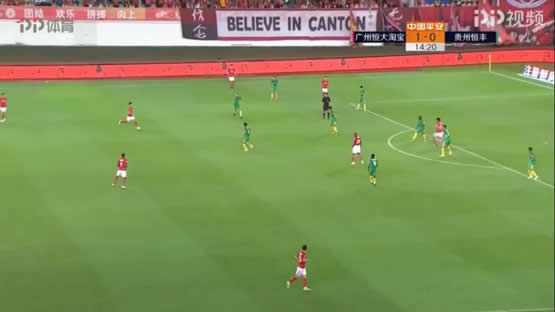 [Space Talisca has in Zone 14] 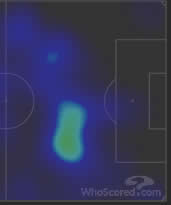 The image and heatmap identify the areas Talisca took up during the match and scored a fantastic goal created with great build up play in zone 14. 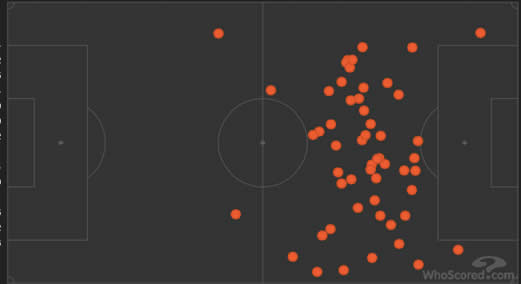 As displayed in image above Evergrande’s Brazilian trio were fantastic in the linking up of play. With a efficient pressing structure, Evergrande continually won the ball in dangerous areas. When playing against teams happy to sit deep, it is absolutely vital to set your team up for these quick transitions. It’s a rare moment where space is free around the box, and it only takes two or three well executed passes to create a quality chance. The three Brazilians in particular punished the away defence repeatedly with their structured counter press.

Guizhou Hengfeng were structurally poor. The huge gap between the attack and defence left them struggling to create meaningful possession, while there was a huge width imbalance which left the team exposed.

Guangzhou are an extremely good team, and their tactic of a high press and attacking flair could have been forecasted beforehand. Nevertheless, they faced a side who were so ill prepared tactically that they did not have great success in their attacking organisation. Talisca had a dream debut, however he was given acres of time and space to do as he pleased., Evergrande were able to take advantage of defensive disorganization to create good attacking opportunities. The Samba trio are a very scary prospect however for and defence in this league.

Gary Mulraney is 29 years young, ex Army and now studying a sport science degree along side an MBA. Gary speaks four languages at different levels of proficiency and is looking to learn Mandarin next. Gary is a Scottish Football accredited coach and enjoys part time analysis. Gary would like to coach abroad in the future, mainly Asia, specifically China.