Reigning champions Guangzhou proved they’re still in the title race as they humiliated struggling Chongqing 5-0 at the Tianhe Stadium.

Brazilian superstar Anderson Talisca followed up a debut hat trick with a superb brace as his remarkable start in China continues.

Talisca’s second was the pick of the bunch for the Canton outfit, as he found himself with the ball on the right hand side of the box. Taking a touch to compose himself, he delightfully chipped a helpless Sui Weijie and found the top left hand corner of the net.

The outrageous effort came fifteen minutes after the Brazilian’s first of the night as substitute Yang Liyu’s first touch put the ball on a plate for Talisca who opened up his body to strike an effort into the far corner.

The Brazilian celebrates his dream start to life in China – Via ahaber.com.tr

Compatriot and fellow new signing Paulinho also shone at the Tianhe Stadium, as he netted his first goal since his return to the seven time champions. The Barcelona loanee passed the ball perfectly into the bottom right hand corner past a despairing Sui Weijie from outside the box.

“It was my second game back and I personally felt much better, both offensively and defensively. Today we were very focused and the team and manager got the tactics perfect. The size of the score isn’t important, it is the three points that is the most important thing.”

Paulinho thought he had his first goal back in China midway through the first half as he nodded in Yu Hanchao’s pin-point cross, however he was deemed to have wandered offside prior to crossing by a VAR review.

With Talisca searching for a second consecutive hat trick, it was VAR that claimed a triple as the review system correctly ruled out three goals within the match.

In Chongqing’s only real threatening attack, Seba thought he had drawn the visitors level in the tenth minute when he tapped in Deng Xinli’s cross, only for VAR to correctly disallow the effort.

Paulinho’s header was VAR’s second victim before fellow Brazilian Ricardo Goulart thought he had his fifteenth of the season in all competitions for Guangzhou, only for VAR to again correctly disallow the goal for offside.

The visitors were put to the sword in Guangzhou back in 2015 when Evergrande recorded a 7-0 victory against Chongqing. A repeat looked on the cards as Guangzhou went a goal up inside 90 seconds.

Talisman Talisca had a tame freekick spilled by Weijie, before the ball eventually fell to right back Deng Hangwen to head into an open net. This was the full back’s first goal since his transfer from newly promoted Beijing Renhe at the end of last season.

Signs looked ominous for the struggling visitors when veteran Gao Lin made it 2-0 midway through the first half. Whilst certainly not as spectacular as his overhead kick effort last time out against Guizhou Hengfeng, the Chinese winger notched in his fifth of the season with a left footed strike.

Another spill from Weijie saw Goulart’s effort rebound to the feet of Lin who cut back onto his left foot before drilling an effort inside the near post and into the back of the net. 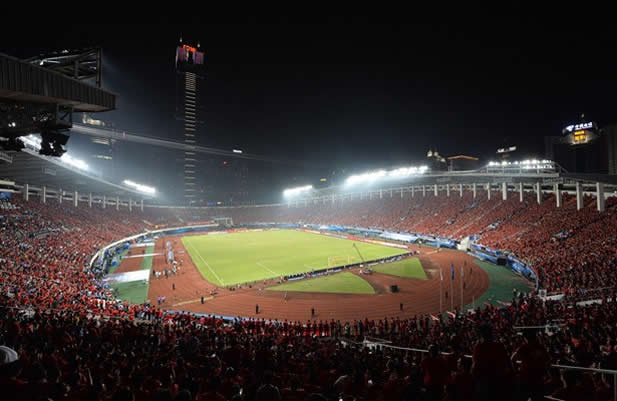 The Tianhe Stadium was rocking as the home side were dominant – Via sport-asia.com

Chongqing, who surprisingly sacked manager Paulo Bento last week after a 2-1 victory away at Tianjin Teda, were simply not at the races this afternoon as Guangzhou put on a show for their loyal supporters.

The home side had thirty attempts compared to the visitors five and this was something Coach Fabio Cannavaro was delighted with:

“Recently we have upped the intensity of defensive work in training so to concede so few chances was good. I keep reminding the players to improve their attention, commitment and desire to win.”

The result moves the home side up to fourth in their mid-season resurgence, only three points off Shanghai SIPG in the Champions League qualification spots. With the two sides’ fixture against one another postponed last week until September due to Typhoon Maria, the clash at the Shanghai Stadium is shaping up to be one of the biggest games on the season.

Lifan meanwhile stay in 13th, perilously close to the drop zone. Only four points above the drop, they welcome bottom side Guizhou Hengfeng to the Chongqing Olympic Sports Centre next week.

Fell in love with the Chinese game after visiting China this spring. Trainee Sports Journalist at Huddersfield University.