Shandong Luneng will feel robbed after a controversial VAR decision cost them all three points in the top of the table clash with leaders Shanghai SIPG in the Chinese Super League.

With the home side one goal to the good midway through the first half, the whole stadium thought the lead had been doubled when former Southampton poacher Graziano Pellè headed Song Long’s cross back across the ‘keeper and in to the far corner.

VAR, which made quite a few headlines during the World Cup, then controversially ruled the goal out minutes later for an apparent foul on SIPG’s Oscar during the build-up. The call appeared very harsh as Wang Tong appeared to have dispossessed the Brazilian cleanly, yet the challenge was deemed enough for the video officials to deny Pellè his goal. 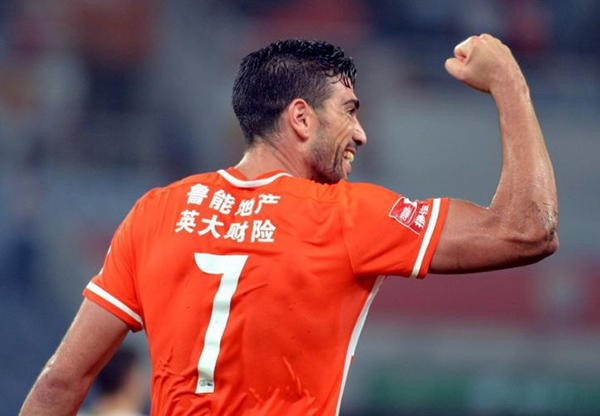 Pellè thought he had put the game to bed – Via estadiodeportivo.com

Shandong, keen to build on a previous narrow victory at Tianjin Teda took the lead, somewhat against the run of play, as Pellè slid a delightful through ball to winger Jin Jingdao who sublimely chipped Yan Junling in the Shànggǎng goal. The 31st minute goal almost took the roof off the Jinan Olympic Sports Centre Stadium as the atmosphere was electric.

SIPG manager Vítor Pereira admitted should the second goal have stood, his side would have struggled to get back into the game.

“After they scored, the level of our game decreased and our passing and dribbling was not as effective as it was before, but when we equalised we created a lot of chances and played very well.”

After the interval, the visitors drew level as former Chelsea man Oscar tapped in potentially the easiest goal he will ever score. The Brazilian chipped a ball to the right for compatriot and captain Hulk to whip back across the face of goal. Substitute Lu Wenjun forced a miraculous save from Wang Dalei before Oscar tapped the resulting second ball home. 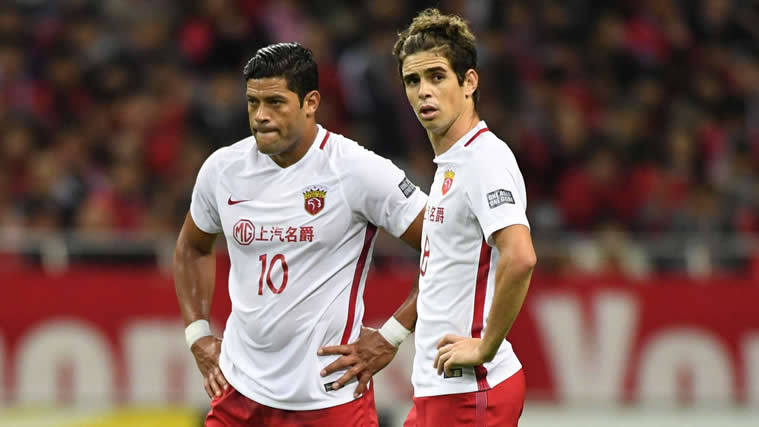 The two Brazilians combined for SIPG’s equaliser – Via Goal.com

Shanghai, the league’s top scorers with twenty seven, could have made it twenty eight within the first minute of play, as superstar Hulk wriggled his way through a lackadaisical Shandong Luneng defence, before opting to try and lob Wang Dalei. His effort was tipped away by the despairing stopper.

Dalei was heroic in the Shandong goal, twice denying in-form Wu Lei his 12th goal of the season. Hulk also found Dalei imperious, as his vicious freekick was palmed away late on by the former Shenhua keeper.

The controversial VAR decision made it two disallowed goals for the three times CSL winners in the first half, as earlier the ball had been hooked home following a goal line scramble in the fourth minute, only for the linesman to this time correctly disallow the goal.

Brazilian forward Diego Tardelli was superb for the Jinan outfit, as he tirelessly pressed the visitors hoping to get a winner. Minutes after SIPG’s equaliser, Tardelli delicately threaded an inch-perfect through ball to the marauding Zhang Chi. The right back checked back inside before curling a left footed effort just wide of Yan Junling’s far post.

Junling denied Tardelli what would have been a goal of the season contender and surely a winner for Shandong late on, as he tipped a left footed strike over the bar following a magical run from the Brazilian.

The game in truth was a tale of two magnificent performances between the sticks for both keepers. Wu Lei drew a spectacular save early on from Wang Dalei after he nodded an enticing cross goal-bound; only to see his effort somehow tipped wide.

Wang Dalei’s counterpart Yan Junling was keen to not be outdone by his opposite number, as he scampered across to divert substitute Wu Xinghan’s glancing header.

Shanghai SIPG host current champions Guangzhou Evergrande at the Shanghai Stadium on Saturday, whilst Li Xiaopeng takes his Shandong Luneng side to the far north east where they will face a stern test against struggling Changchun Yatai.