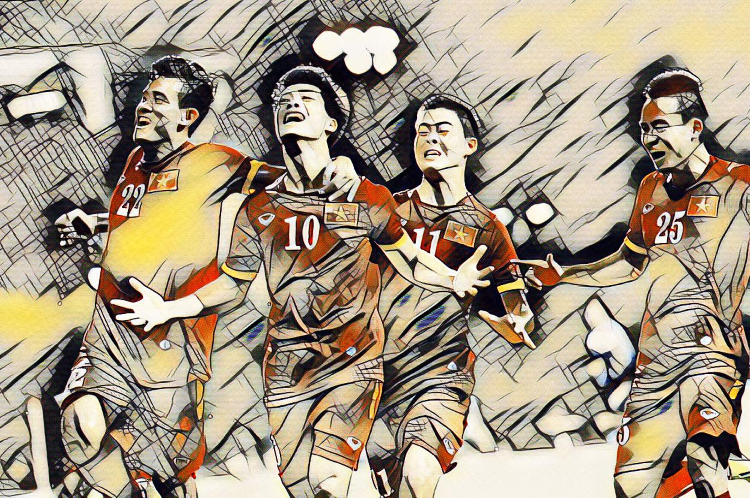 It’s not bad when your U23 football team makes headlines which contain the phrases global and impression. Vietnam have that pleasure, after their youngsters somewhat inspired a generation by battling against the odds to achieve a near impossible task on paper.

Finishing runner’s up. Such were the low expectations a cup run which resulted in a final’s defeat to Uzbekistan still led to heroic scenes for the team when they returned to Hanoi after the competition had ended.

Overnight celebrations commenced, with 40,000 passionate and faithful fans packing into the My Dinh National Stadium to give their own a hero’s welcome.

The people of Vietnam’s biggest city had waited for hours to get a glimpse of a group of players as they passed by in an open top bus parade. Banners hanged from windows and scaffolding. The construction workers had taken a break from work to make sure that everyone could get some sort of vantage point.

Various Korean outlets also expressed amazement at the way football fans have celebrated their national team’s achievement, and at the same time, hailed the team’s performance at the tournament as “heroic” and “like a fairytale”.

For a football game to bring a country together like this is astonishingly rare if it is not a World Cup final or in terms of British football, the European Championship final. Yet this was an U23 tournament, and Vietnam didn’t even win the thing.

The fact residents were claiming that in the past 70 years this was the biggest collection of the country’s flag for regular citizens that they had ever seen is a testament to the passion the nation has for its football.

And we wonder why China has underperformed. Just a few hundred miles east, the nation with the world’s biggest population has tried to embrace football, from the orders of President Xi Jinping to the hundreds of Genbao football academies across the country, set up by a maverick in 2000.

Yet China finished second from last in their Asian qualifying group for the FIFA 2018 World Cup. Below war-torn Syria. Only above Qatar. That also says a lot about 2022 but that’s not the point here.

If celebrations from Hanoi transpired to cities such as Shanghai, Tianjin and Beijing then a majority of football fans would be astonished. The question is not of infrastructure and ability, it’s a tale of a nation uninspired by a sport that it wants to see be the forefront of what it stands for regarding sport.

Ask anyone in China and they would love to see the country outdo the odds and host the 2030 World Cup, let alone win it. The Beijing Olympics in 2008 proved that when push comes to shove the people of China will come out in masses and support their side. After all, they finished top of the medal table and this was hardly surprising.

Will we see Vietnam-style celebrations for a potential future U23 China appearance? It’s unlikely. And it’s not going to change anytime soon. There is room for an event like that to occur but football is not the national sport and will not provide a cultural identity for a country so eager for success. Second place is not good enough. But in this sense, without appreciation for progress, there is no way that the pinnacle will be reached.