The match week saw Guangzhou Evergrande open up a four-point lead at the top. Shanghai SIPG blinked first and their ill-tempered draw against Guangzhou R&F sees them fall further behind the all-conquering Guangzhou.

Guangzhou Evergrande began proceedings with their trip to Guizhou Zhicheng. Despite not putting on the best of performances, the league leaders came away with a 2-0 win. Goals in either half from Lin Gao and Ricardo Goulart secured Guangzhou’s ninth consecutive victory.

Shanghai SIPG took on the draw specialists Guangzhou R&F and the result was, you guessed it, a draw. It was an ill-tempered clash. Goals from Zahavi and Hulk before half-time completed the scoreline. But shortly after Hulk’s goal, Oscar belted two point-blank volleys at Guangzhou players leading to a mass brawl involving players, substitutes and support staff. Two red cards for each team and three yellows for R&F were dished but the officials struggled to get the situation under control. It remains to be seen whether the FA will take action against the guilty players.

It was a new coach, same old problems for Jiangsu Suning. Another defeat, this time against Changchun Yatai leaves the club three points from safety. An own goal from BoYu Yang in the 16th minute saw Changchun leave Jiangsu with all three points.

But Beijing Guoan did not face the same problems as Jiangsu Suning as the managerial change saw them win 2-0 against 10 men Tianjin TEDA. Burak Yilmaz and Renato Augusto were the goalscorers. Beijing dominated from the off and barring a short spell in the middle o the first period, Tianjin were outplayed. Great start under new coach Roger Schmidt.

Shandong Luneng romped home to a comfortable 3-0 victory over Liaoning Whowin. A Diego Tardelli brace and Pappis Cisse helped the club win all three points. It was complete domination from Shandong as Liaoning barely had a sniff at goal.

Henan Jianye walloped listless Yanbian Funde by three goals to one. It was Yanbian’s third consecutive defeat and barring a dramatic change, they will start next season in the Chinese League One. Zhong Jinbao and Javier Patino’s goals were complemented by Jin Hongyu’s own goal. Bit-Garam Yoon scored the consolation goal for Yanbian.

Shanghai Shenhua and Chongqing Lifan played out a 2-2 draw. Shanghai dominated for most of the game but had to come back from a goal down twice, first through Xinli Peng and later through Alan Kardec. Yunding Cao and Jianqing Mao equalized for Shanghai.

Cheng Zeng, Guangzhou Evergrande – Another selection into our Team of the Week for Zeng. Did very well to keep a clean sheet and was by far the best keeper in action this week,

Lin Dai, Shandong Luneng – Kept a clean sheet. Snuffed out the unlikely Liaoning attack. Assisted despite being a center back.

Yang Yu, Beijing Guoan – A key element of Beijing’s dominating performance. Solid at the back and anchored the defence while the full backs went overlapping.

Lei Li, Beijing Guoan – Another full back with an assist. Li was instrumental helping out his fellow defenders and overlapped effectively going forward.

Borek Docal, Henan Jianye – An assist to complement the classic winger performance. Charged up and down the right flank creating opportunities and snuffing them out while tracking back.

Xiaobing Zhang, Beijing Guoan – A Paulinho-esque performance from Zhang. His dominance in midfield was the foundation upon which Beijing built upon.

Xingham Wu, Shandong Luneng – Was involved in all the good things attackingly. Tracked back when required and did very well on the whole.

Hulk, Shanghai SIPG – Scored a goal and was unlucky not to win the game for his side late on.

Diego Tardelli, Shandong Luneng – five shots, five shots on target and two goals. Made several key plays and put in his best performance of the season. He has been in good form over the past several weeks.

Ezequiel Lavezzi, Heibei China – Provided the key assist late on to secure his team’s victory. Has turned a corner the past few weeks and is in his best form in the CSL to date. 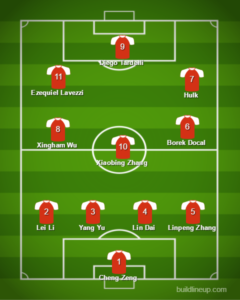