Shanghai SIPG capped off an impressive week with a 5-1 hammering of Beijing Guoan in the China Derby, as Andre Villas-Boas’ side kept up the pressure at the top of the league table. It was their fourth consecutive victory and it keeps them within two points of league leaders Guangzhou Evergrande.

Wei Shihao opened the scoring for Shanghai after 26 minutes of Beijing dominance. It was a goal against the run on play and Bejing were hard done by. The goal was assisted by Lei Wu. The scoreline remained 1-0 until halftime. Resumption of the game saw Shanghai make it a 3-0 lead within 12 minutes. Wei Shihao bagged the team’s and his second and Hulk scored the third. Both goals were assisted by Oscar. Lei Wu scored a brace in 9 minutes and made it 5-0 to the Shanghai side. Burak Yilmaz grabbed a late consolation goal for the Capital side.

Champions and league leaders Guangzhou Evergrande coasted to a comfortable 2-0 win over Chongqing Lifan. Hanchao Yu opened the scoring late in the first half. The second half was not as much as a spectacle as the same period of the China Derby, but nonetheless, Ricardo Goulart scored and Evergrande got the job done. They maintained their two point lead and we have seen nothing that can stop the top-2…yet.

Meanwhile, things went from bad to worse for Guangzhou R&F. Their 0-0 draw against Shanghai Shenhua meant they are now five league matches without a win. This wretched run of form has seem them concede the No.1 position to Canton rivals Evergrande. To make things worse, they now sit in fourth place, a massive nine points behind Evergrande and three behind Heibei in third. The match was dominated by Guangzhou, but they were not clinical enough to break down a resilient Shanghai side.

In this week’s most entertaining game, Jiangsu Suning secured a hard-fought but well deserved 2-2 draw against Guizhou Zhicheng. The point lifted Jiangsu out of the relegation places and into 13th place. Ramires and Alex Teixeira lined up inside the first quarter of an hour and the former found the back of the net. Their lead lasted until just after the hour mark as Festus Baise levelled things up. Jiangsu hung on for dear life, but conceded a goal three minutes into stoppage time. Despite the three minutes signaled by the fourth official, Jiangsu came back and scored five minutes into stoppage time and made sure they went home with a point for their efforts.

Heibei China had to rely on the late heroics of Chengdong Zhang to secure a 2-1 victory over Changchun Yatai. Earlier on, Ezequiel Lavezzi continued his good form with the opener 10 minutes in to the game. Long Tan and Ighalo linked up to level things up before Zhang’s late winner.

Tianjin Quanjian had Zheng Dalun to thank for as he grabbed a brace and scored another as they beat cross-town rivals Tianjin TEDA 3-0 in their match.

Yanbian Funde dropped to the bottom of the table as an Anthony Ujah brace and Lukimya goal secured a 3-1 victory for Liaoning Whowin. Bit-Garam Yoon scored for Yanbian to level things up for a short while.

Shandong Luneng and Diego Tardelli scored twice after 80 minutes to complete a sensational comeback against Henan Jianye. Xinghan Wu opened the scoring after just three minutes but Henan turned it around with two goals on either side of half-time. They were scored by Zhong Jinbao and Zhao Ke.

TEAM OF THE WEEK.

GOALKEEPER
Cheng Zhang, Guangzhou Evergrande – Kept a clean sheet and put in another assured performance for Evergrande. His importance to the team has never been nigher.

Liu Yimmimg, Tianjin Quanjian – The second wall in Tianjin’s defense. Was even better than his partner at the back. Made several interceptions, clearances and blocks at the back.

MIDFIELD
Chengdon Zhang, Heibei China – A goal and an assist to go with his powerful performance down the right. Was sound when helping out his right back at the back.

Xuri Zhao, Tianjin Quanjian – Dominated midfield for Quajian. Had two assists and made a handful of clearances and interceptions.

Oscar, Shanghai SIPG – Did not score, unfortunately, but provided three assists. Impressive yet again in the middle of the park. Sprayed the ball around and Beijing could not handle him and was vital as Shanghai overran the midfield.

Zheng Dalun, Tianjin Quanjian – A brace from the left wing. Threatened Tianjin right flank all day long and was a handful for the defence.

ATTACK
Lei Wu, Shanghai SIPG – Two goals and an assist. Was unstoppable going forward and did not put a foot wrong. Player of the week.

Ezequiel Lavezzi, Heibei China – Another quality performance. His uptick in form has seen his team reach third place in the league table. Finally showing the quality that saw his team splash the cash they did for the Argentine.

Wei Shihao, Shanghai SIPG – A brace. It would have been a man of the match performance had Lei Wu not put in that performance. Would have turned the heads of Chinese boss and has found his way into national team consideration. 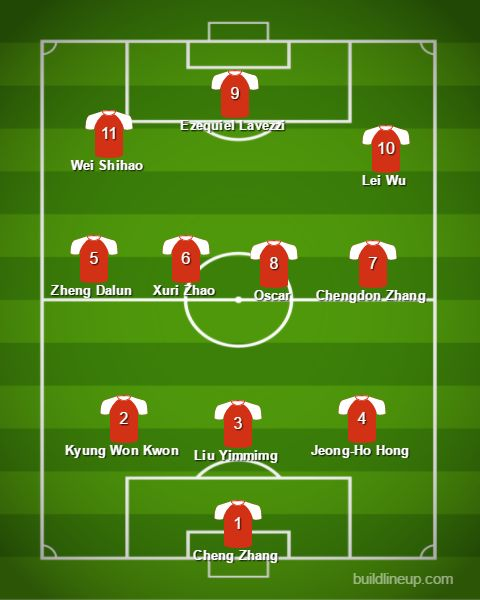