Guangzhou Evergrande made it 10 wins in a row as Shanghai SIPG climbed back up to second place in the League. Down at the foot of the table, Yanbian lost their fourth consecutive game while Jiangsu continue to remain stuck in the relegation places.

Guangzhou Evergrande’s quick start in the second half saw them score two goals within 10 minutes of the restart, enough to get the better of Hebei China. Brazilian duo Alan and Ricardo Goulart were the goalscorers while Hebei had Hang Ren sent off late on for a second bookable offence. It was Guangzhou’s 10th consecutive victory.

Shanghai SIPG and Elkeson ran riot in the second half against Henan Jianye. 3 goals in a 15-minute spell helped Shanghai secure all three points. Shanghai earlier took the lead in the first-half from an Eddi Gomes own goal. Javier Patino scored a consolation goal for Henan late on but it was a demoralizing defeat.

Guangzhou R&F ended their run of draws with a victory over Tianjin TEDA. Goals from Eran Zahavi and Renatinho was enough to overturn Yuanyi Li’s opener. Guangzhou remain stuck in 6th spot in the table after doing most of the pace setting in the early part of the campaign.

Goals from Xingcan Li and Alexandre Pato helped Tianjin Quanjian to a comfortable win over Liaoning Whowin. Despite the fact that Whowin got one back through Zhang Yangjun, they did not look like equalizing. Tianjin sit comfortably in midtable. Liaoning sit uncomfortably in 12th place after losing their last 3 matches.

Shanghai Shenhua ran out 2-0 winners over struggling Yanbian Funde. It was terrible, amateurish defending that gave Shanghai both their goals. The first was scored by Carlos Tevez after winning the possession just outside the penalty area. The second was a similar instance of kamikaze defending to allow Yunding Cao to score and secure Shenhua’s victory.

Chongqing Lifan and Changchun Yatai played out a 1-1 draw. Goals in the second period from Zhenyu Du and Huan Liu completed the scoreline. Both clubs missed out on an opportunity to increase their prospects of staying up.

Shandong Luneng had to rely on a 93rd minute Diego Tardelli equalizer to avoid defeat against Guizhou Zhicheng. Papiss Cisse opened the scoring for Shandong. Guizhou came back strongly to take a 2-1 lead in the 87th minute through Nikicia Jelavic and XueMing Ling.

Beijing Guoan and Jiangsu Suning played out a 0-0 draw on Monday. 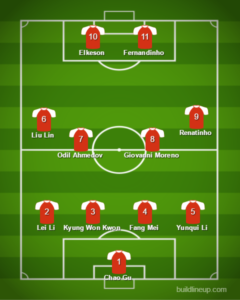 Chao Gu, Jiangsu Suning – Made a number of saves in Jiangsu’s 0-0 draw against Beijing Guoan. Played well and kept a clean sheet.

Yunqui Li, Shanghai Shenhua – Solid at the back and made his contribution in his team getting the clean sheet. Provided a second option while on the offence.

Fang Mei, Guangzhou Evergrande – Made a number of interceptions and clearances. Stopped one from going in at the goaline.

Kyung Won Kwon, Tianjin Quanjian – His stat line of 8 clearances, 3 interceptions and 1 tackle is more than enough to secure a place in the Team of the Week. Impressive display at the back.

Lei Li, Beijing Guoan – Was a part of the collective good that Beijing did. Defensively solid and important offensively, it was one of Li’s best displays of the season.

Renatinho, Guangzhou R&F – Returned to his goalscoring and commanding ways. Guangzhou missed these displays and linked up well with Zahavi.

Odil Ahmedov, Shanghai SIPG – Played so well that Shanghai did not miss Oscar. Scored a goal and could have had more.

Giovanni Moreno, Shanghai SIPG – Too good on the night. Several big plays and chances and was unlucky not to finish among the scorers or assistors.

Liu Lin, Guangzhou R&F – the left flank is also commanded by an R&F player. Created a couple of big chances and had a good vision all through the game.

Elkeson, Shanghai SIPG – A goal and an assist to go with a brutish performance. Too good on the night and easily the week’s top performance.