The last round of matches before the international break had a lot of implications. The prime example of it being the sacking of Jose Gonzalez from Beijing Guoan. The Board of Directors took the decision after weeks of underwhelming performances from a squad that is very strong on paper.

Travelling to Chongqing Lifan, Beijing got off to the worst possible start. Having lost the ball near the halfway line, Chongqing put together a sleek move of one-two touch passing which released Fernando down the touchline. After beating his man cleverly, Fernando cut the ball back into the path of the onrushing Wu Qing. Beijing were all over the place and were sliced open like a hot knife through butter. To Beijing’s credit, they did dominate things going on but were predictable going forward. Frustration set in as the game grew and the capital club received two red cards to end the day with 9 men. With names like Ranieri, Mancini and Moyes linked, the capital club can be forgiven for being optimistic about their future.

League leaders Guangzhou Evergrande travelled to bottom side Yanbian Funde with Shanghai SIPG breathing down their necks. With half an hour gone, Paulinho stuck his leg out at a long range shot and beat the goalkeeper to take the lead. But Yanbian came back strongly courtesy of a free kick from Yoon Bit-Garam. But late in the second half, Yanbian shot itself in the foot after a back pass intended for the keeper was met by Ricardo Goulart. He made no mistake and the ball ended up in the back of the net. Lin Gao then made it 3-1 as Guangzhou ensured that they would go into the break top of the league.

Second place Shanghai SIPG took some time to get going but once they did, Liaoning Whowin stood no chance. Three goals in 16 minutes towards the end of the second half secured the result. Hulk scored two of those while Lei Wu took the third one well. Liaoning pulled one back in extra time but Shanghai scored again with the last kick of the match. Shanghai continue scoring goals for fun.

Hebei China were given a scare by Jiangsu Suning but came back from a goal down to clinch a 2-1 away win. Xiang Ji opened the scoring just prior to the break. But the visitors came out all guns blazing in the second half. Aloisio scored twice to condemn Jiangsu to another defeat.

Tianjin Quanjian travelled to Shandong Luneng hoping to continue their good form. But half an hour in, they found themselves trailing Shandong. Axel Witsel levelled it up before the half ended and Xiuwei Zhang completed the turnaround midway through the second half. But Shandong deserved a draw after dominating the game for large durations. Tianjin were clinical in front of goal and defensively were solid.

Guangzhou R&F dropped another pair of points as the early season pace setters conceded a 93rd-minute equaliser to Christian Bassogog. It was Guangzhou’s sixth match without a win and the fourth consecutive draw. After an impressive start, R&F have been in freefall and now sit in fifth place.

Tianjin TEDA completed a late comeback against ten-men Shanghai Shenhua. Obafemi Martins opened the scoring after 11 minutes but Brown Ideye equalised before the half time whistle. Brown scored his second a minute before the 90-minute mark and secured all three points. They were brilliant in the second half and turned the screw towards the end after Peng Li was sent off.

Changchun Yatai and Guizhou played out a 1-1 draw. Jelavic scored with the first attack of the game but it turned to be the last meaningful attack for Guizhou. Changchun controlled the game thereafter, but could score just one in reply. More points dropped.

Xiaofei Deng, Chongqing Lifan – In a week full of goals, Deng was the only keeper who kept a clean sheet. Solid performance.

Huan Fu, Shanghai SIPG – Put in a decent performance at right back. Had an assist and defensively solid.

Huan Zhengyu, Guangzhou R&F – Kept together a defence that looked a shambles whenever the opposition mustered an attack.

Zheng Zu, Guangzhou Evergrande – Was good at the back and even better going forward.

Zhi Zheng, Guangzhou Evergrande – Did everything. Rarely lost the ball and kept the attack from stagnating. Showed why he is widely considered to be the greatest Chinese player ever.

Hulk, Shanghai SIPG – Another brilliant performance. Two goals and won the penalty which he duly converted.

Aloisio, Hebei China – Scored both goals in a second half comeback. 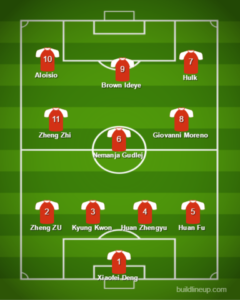