In the biggest game on Matchday five, Beijing Guoan travelled to Jinan to face Shandong Luneng, where the away side needed a win to stay with the teams at the top of the table.

It started poorly for the green-clad visitors as they were unfortunate to concede a penalty after only five minutes. Graziano Pelle stepped up to take it but, put it just wide of the post, some may say justice was served. Those who thought so would be less vocal come half-time. Just before the 40-minute mark, Wu Xinghan scored with a long-range shot that found its way into the net. In the second half Beijing tried to fight their way back but couldn’t find a way through a well-structured Shandong defence and the match ebbed out with only one goal.

The first match of the weekend saw Chongqing Lifan welcome Guizhou Hengfeng to the Chongqing Olympic Sports Centre. The visitors were in need of points to avoid dropping into the relegation zone while the home side wanted a win to mount a challenge for the Champions League places. In the end, Chongqing got what they wanted as the match ended 2-1.

Shanghai Shenhua almost got more than they bargained for as they faced bottom of the table Changchun Yatai. Fredy Guarin put the away side in front as expected after 18 minutes. Then Odion Ighalo scored from the spot kick five minutes before half time. Ighalo then only needed five more minutes on the other side of the break to put the bottom-dwellers in front. However, they were quickly brought back down to earth as Cao Yunding scored only two minutes later, and then Giovanni Moreno completed the heartbreak for Changhun as he put Shanghai in front with only two minutes to go. To make matters even worse for Changchun, Ighalo had to be carried off with an injury after 70 minutes.

Tianjian Quanjian and Shanghai SIPG faced off as both teams looked to cement their position near the top of the league. SIPG started the best as Chinese International Wu Lei scored just before the break. Five minutes into the second half, Hulk missed a penalty and ten minutes later Tianjian punished Shanghai for their missed opportunity as Alexandre Pato made it level. That was the last goal of the game but, Shanghai should perhaps have won it. They had seven shots on target to Tianjian’s three.

On Sunday, Guangzhou Evergrande travelled to Tianjin TEDA, who had to make do without John Obi Mikel for the second match in a row. And perhaps the lack of the Nigerian was what made this a somewhat easy 3-0 win for Guangzhou. Ricardo Goulart was, without doubt, the man of the match. He scored a penalty after 13 minutes, before scoring his second of the day after 72 minutes and assisted the final goal after 84 minutes.

The two other matches during the weekend both finished 1-1. On Saturday Yanbian Funde drew with Ezequiel Lavezzi’s Hebei China Fortune while on Sunday, Ramires scored for second-to-bottom Jiangsu Suning as they drew with fellow relegation candidates Henan Jianye.

The final match of the Matchday saw Liaoning Whowin take on Guangzhou R&F who could go top of the table with a win. And that was just what they got. Led by an on-form duo of Eran Zahavi, who scored twice, and Xiao Zhi, who assisted both of Zahavi’s goal before bagging one himself. Renatinho put the final nail in the coffin as Guangzhou R&F ran rampant, winning 4-1.

Team of the week:

The team of the week this week is dominated by players from both Guangzhou teams as well as Shanghai Shenhua and plays in a cheeky 3-4-3 Diamond formation. 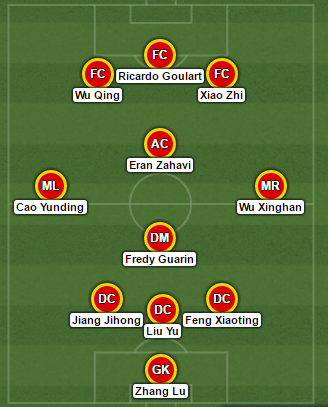 Zhang Lu, Tianjian Quanjian – Despite letting in one goal against Guangzhou the stopper had a good game. Making a total of six saves, he kept the Guangzhou attacking-arsenal at bay for almost the entire game.

Liu Yu, Chongqing Lifan – Had an overall good game against Guizhou with a couple of vital blocks to earn him a spot in defence.

Feng Xiaoting, Guangzhou Evergrande – Kept a clean sheet with Evergrande and barely let Brown Ideye and the other Tianjin players have a look in.

Cao Yunding, Shanghai Shenhua – Scored his second of the season with a low shot and had a good game on the left flank for Shenhua.

Fredy Guarin, Shanghai Shenhua – Guarin scored the first for Shenhua in their 3-2 win over Changchun and assisted Cao Yunding for his goal.

Wu Xinghan, Shandong Luneng – Wu scored the only goal in the 1-0 win over Beijing Guoan and played well all game.

Xiao Zhi, Guangzhou R&F – Zhi assisted both of Zahavi’s goals before netting one himself in R&F’s 4-1 win over Liaoning.