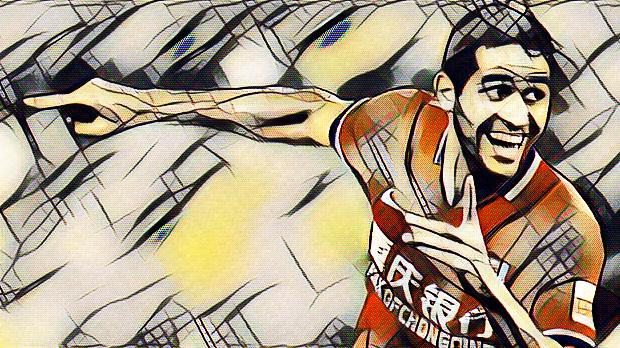 Alan Kardec de Souza Pereira Júnior, as is his full name, was born in Barra Mansa in the state of Rio de Jainero, which meant it made sense to join the youth setup of Rio-club Vasco da Gama when he showed the early promise of becoming a good footballer.

He spent seven years in the youth system before being called up to the first team in 2007. He made his debut for the senior side in a Copa do Brasil match in February that year. He scored his first goal for Vasco a few months later, in April, when Vasco and Botafogo drew 4-4 in a Rio de Jainero State Championship match. He played a total of 26 league matches for Vasco that year and scored his first league goal in July, when Vasco blew past Atlético Mineiro to win 4-0.

The following season he played 19 league games as Vasco da Gama got relegated. He only played six times for Vasco in the Série B in 2009 and for the last half of the season he was loaned out to Série A side Internacional. Here he only played twice in the short amount of time he got there.

After the 2009 season ended it was announced that Portuguese heavyweights Benfica wanted him and Vasco gladly sold for a price of €2.5 million. He played thirteen games in total in the last half of the 2009/10 season.

For his first full season in Portugal Kardec found his playing time limited to 12 matches in the league, and 25 appearances for Benfica in total and after the season ended he was loaned out back to Brazil for a year. This time the destination was Santos.

At Santos Kardec got more playing time and seemed back to his old self, although the goals didn’t really come. 27 appearances in the league for Santos was the total tally after the 2011 season. As the 2012 season started Kardec played four league matches, as well as 20 matches in the Saõ Paulo State Championship, where he scored 7 goals. His loan deal was running out and Santos wanted to renew it, but Benfica only wanted to let Kardec leave if it was on a permanent deal.

A deal could not be agreed and Kardec returned to Portugal and was demoted to play for the B-side.

After going through the 2012/13 season barely playing, Kardec was once again loaned back to Brazil, this time to Palmeiras, for the 2013 season. Here he really found his form and scored 14 goals in 27 league appearances.

Although he started the 2014 season as a Palmeiras player, playing one match in the league, it was revealed that Saõ Paulo bought him from Benfica for €4.5 million on the 12th of May 2014.

He was an integral part of the 2014 Saõ Paulo side that finished second in the league, but found himself out of playing time for the following 2015 season, making only eight appearances, three as part of the starting eleven.

He then made 12 appearances for the Brazilian side in the 2016 season before Super League club Chongqing Lifan wanted his services.

He played 10 games and scored 7 goals in the last half of the 2016 season and he has started this season with one goal in nine appearances.

Chongqing sit down in 12th, only three points off the relegation spots and the fans are surely hoping that Kardec can find some of that form from last year to take them away from the danger.