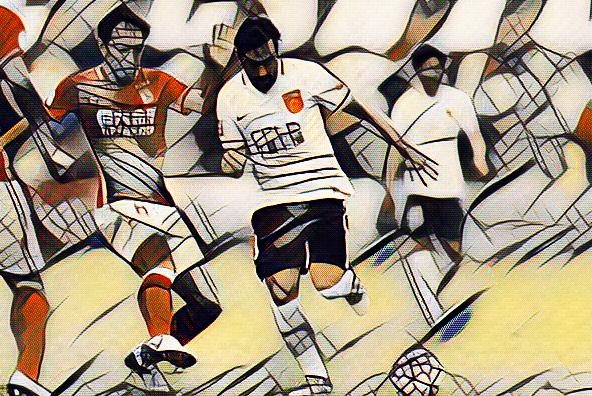 Lavezzi started his career at Estudiantes de Buenos Aires (no, not the Estudiantes you’re thinking of, that’s Estudiantes de La Plata) in his homeland before moving to Italy and Genoa in 2004.

He was immediately loaned out to Argentine big boys San Lorenzo where he did well and scored eight goals.

It was planned that Lavezzi was to go back to Genoa after the season had ended in Argentina. However, that did not happen as Genoa were involved in a match-fixing scandal that saw them relegated to Serie C. Due to poor finances they had to sell Lavezzi who went back to San Lorenzo.

A couple of good years followed in San Lorenzo, they took the title in his last season there, before a return to Italy awaited in the summer of 2007.

Lavezzi was bought by newly-promoted Serie A side Napoli on a five-year deal. He scored a hat-trick against Pisa in the Coppa Italia and became the first Napoli player to score a hat-trick in 14 years(!).

The first season back in the Serie A was a success for both Napoli and Lavezzi as they finished eight in the league. The following season was a step back, but still a decent performance, as Napoli finished down in 12th place.

In the 2009-10 season, Napoli bounced back and finished in the sixth position ahead of Juventus. Lavezzi got one-third of his season ruined by injury but still managed eight goals from the wing.

In his final season in Italy, the 2011-12 season, Lavezzi and Napoli finished fifth but they won the Coppa Italia and got all the way to the Round of 16 in the Champions League, having qualified by finishing third the season before.

After his impressive showings in the sky-blue shirt of Napoli, the newly-rich owners at PSG wanted his services so Lavezzi was off to Paris in a deal worth around €26.5 million.

On February 17th last year Lavezzi was sold to Hebei China Fortune for £4.6 million and he is reportedly earning £493,000-a-week.

He has not been a success so far in his time in China. He only played 10 matches last season as he picked up an injury on international duty with Argentina that kept him out for most of the season. This season he has only played once, in the season opener, a 0-0 draw with Henan Jianye. He has not been in the squad for the other two matches and will really need to pick up his performances if he wants to win over the Hebei faithful and prove he deserves his huge wage.