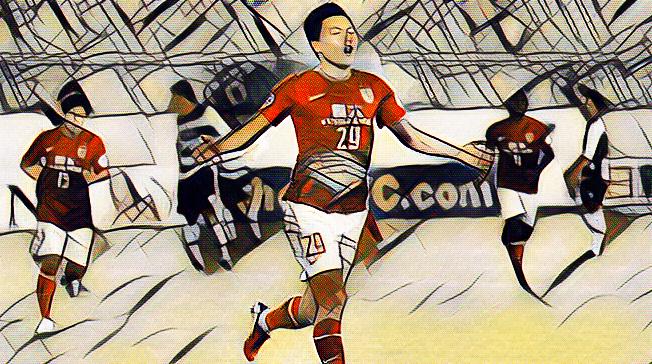 Lin Gao is one of China’s most technically gifted strikers. His versatility provides him the opportunity to play either in his preferred central role or even on the wing. Growing up, he was a big fan of Jürgen Klinsmann. He wears the No.18 kit in honor of Klinsmann and is affectionately known as Gaolinsmann.

Gao currently holds the goal scoring and appearances’ record at Guangzhou Evergrande with 93 and 282 caps for the team he joined in 2010.

Lin Gao began his career at Shanghai Shenhua making his debut in August 2005, coming on as a substitute for Xie Hui. Initially Gao struggled to nail down a central striking position and was often played out on the wings. It was only after the 2007 season and Xie’s departure that Gao got more chances to play centrally. His 8 goals in the League guided Shanghai to a runner-ups finish in 2008. That season also saw Gao consolidate his position in the China squad.

After Guangzhou’s takeover, he was convinced to play a season in the second tier and joined the squad and guided them back to the Super League. Evergrande’s financial prowess meant attacking options like Dario Conca and Cleo. This meant that Gao was played out on the left once again. But he was by no means a disappointment, scoring 11 goals in 29 appearances and firing his side to the Super League title. It was Gao’s first League medal (top tier).

The start of the 2012 season was difficult for Gao as he went through a personal goal drought of 1403 minutes before his goal against Buriram United in the Champions League. Soon after he broke an over 900 minute drought in the League with a goal against Qingdao. The title was sealed in injury time against Liaoning Whowin with Gao scoring the winner.

The following season saw Lin Gao take a backseat in goalscoring duties allowing players like Elkeson and Dario Conca to take over the scoring mantle. He became an assist machine and often attempted spectacular overhead kicks and the fancy backheels. His style of play was applauded by pundits and adored by fans.

Lin Gao has consistently performed at a high rate. He was twice selected in the Chinese Super League Team of the Year – 2012 and 2016. Lin Gao’s goals and performances have helped his team open up a four point lead at the top of the League table in the current season.