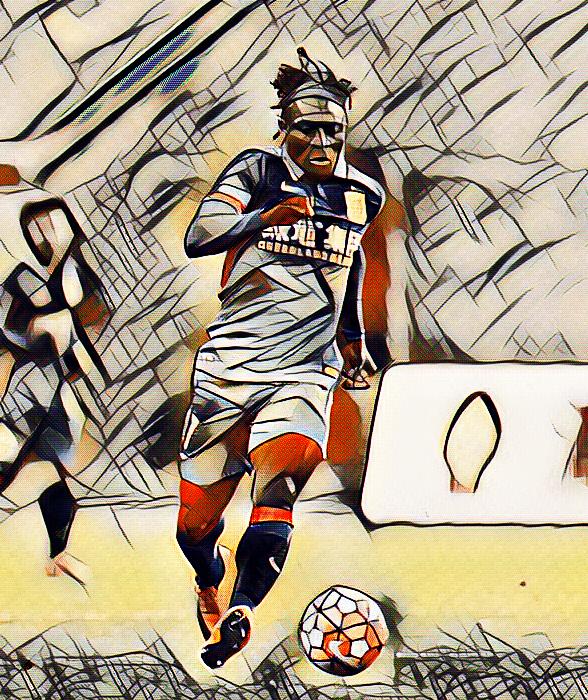 Obafemi Martins was born in Lagos, Nigeria’s largest city in October 1984. He was best known throughout his career for his blistering pace, at his peak he was one of the fastest strikers in Europe, as well as his trademark backflip celebration. He is currently married to the sister of Mario Balotelli, bad-boy extraordinaire of football.

Martins began his career with his hometown team FC Ebedi, although they have relocated since his departure, after being spotted by their manager while having a kick-about on his local streets. After a year playing for Ebedi, scouts from Italian side AC Reggiana noticed his talent and offered Martins a two-month trial. The trial was a success and in 2000, Martins left Nigeria and signed a youth contract with the side. Martins’ first season saw him break into the first team, and he only had to make 2 appearances before one of Italy’s biggest teams, Inter Milan, came calling.

Martins signed for Inter in 2001 and spent a season ripping up the Italian youth system, scoring 23 goals and helping Inter to the U18 title. He became a first-team regular in the following season, scoring some crucial Champions League goals but ultimately could not prevent Inter crashing out of the competition in the semi-finals to arch rivals AC Milan. When Inter decided to sign both Hernan Crespo and Zlatan Ibrahimović in 2006, Martins was deemed surplus to requirements and sold to Newcastle United for £14 million, leaving with a record of 28 league goals in 88 appearances. The move was subject to controversy as the Nigerian FA made a registration mistake with his date of birth which made it appear that Martins was 7 years older than originally thought. The NFA apologised and the error was corrected but it almost put the move on ice.

Martins inherited the famous number 9 shirt at Newcastle, vacated by Alan Shearer following his retirement, but ultimately could not live up to the pressure and expectation placed on his shoulders. His Newcastle career started promisingly, with 17 goals coming in his first season, and rumours of a big money move to Chelsea. However, too many managerial changes and injury stalled his progress and he became an impact substitute in his second and third seasons. When Newcastle were relegated in 2009, they had to get some high wage earners off their books, which resulted in Martins being sold to German side VFL Wolfsburg for £9.45 million. Despite the difficult end to his Newcastle career he was regarded as a fan favourite due to his speed and long-range goals, which excited the fans during a difficult period for the club. He left with a record of 35 goals from 105 games.

Now beings the nomad chapter of Martins’ career. His stay at Wolfsburg lasted only one season, and 6 goals, before moving to Russian champions Rubin Kazan in 2010. He again only spent one season there before requesting a move back to England following the birth of his child. He was loaned to Birmingham City, and scored the winning goal in the 2011 League Cup final, before further injury setbacks and a free transfer to Spanish club Levante when his Rubin Kazan contract expired in 2012. In what was becoming a habit for Martins, he yet again only spent one season in Spain, scoring 7 goals. It was at this time that the MLS in USA was beginning to become more popular and lucrative, and Martins made the move to Seattle Sounders in 2013.

Martins had a relatively long and successful stay with Seattle. In his second season, he helped them win the MLS Supporters Shield and ended the season with 17 goals, a new club record. In that season he also tied the club’s most assists record, with 13 to his name. He was named as one of three league MVP finalists and made it into the MLS Best XI, as well as netting the goal of the season. Following his stay in Seattle, Martins moved to Shanghai Shenua in 2016 for £2.4 million and to date has scored 15 goals in 33 games, bearing the burden left by Carlos Tevez’ disappointing start for the club.

Martins was one of Nigeria’s most important players when he was at his peak, and has scored 18 goals in 41 appearances for his country. He also helped the team finish third in the 2006 African Cup of Nations. However, he has only made four appearances since 2010 and his international career looks to be over.