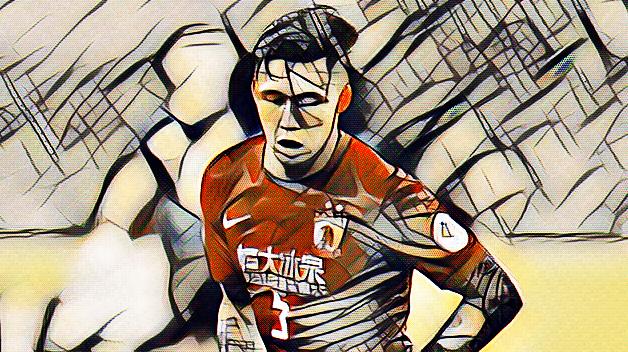 He’s heavily tattooed, he’s been described by former Guangzhou manager, now Chinese National Team manager, Marcelo Lippi as “the best Chinese footballer in the Chinese Super League” and has been given the nickname Zhangmos by the loving Guangzhou Evergrande-fans, comparing him to Real Madrid and Spain superstar Sergio Ramos.

Before Lippi took over Guangzhou in 2012 his assistant Narciso Pezzotti had reportedly been watching the team play and made this note of Zhang: “No. 5 [Zhang] has the potential to play in one of Europe’s top leagues,” he told reporters. “He is young, though, and still needs to take suitable advice.”

Unfortunately, that has yet to happen, and now at 27, time might be starting to run out. But Premier League giants Chelsea were looking to get a deal last summer so there is still interest from abroad but, unfortunately, the paperwork and general agreements of the deal could not be made.

As a youth player Zhang, who is from Jinan in the Shandong province, moved around quite a bit before finally settling in at the renowned Genbao Football Academy run by Shanghai Dongya (Now Shanghai SIPG). Here, he spent four years before going on to play for Dongya’s first team.

Another four years were spent at Dongya where he helped the team win promotion to League One in 2007 before helping them cement their spot as a top-half League One team, with four straight top-seven finishes, before newly-promoted and highly-ambitious Guangzhou Evergrande came calling at the end of the 2010 season.

Prior to the transfer, Zhang had surprisingly made his debut for the Chinese National Team and even scoring on his debut in a 2-2 draw with Jordan in December 2009. Since then he has gone on to play over 50 times for China.

He made his Guangzhou debut on April 2nd in a 1-0 win over Dalian Shide and went on to play 16 matches that season as Guangzhou won the league for the first time ever.

Zhang was once again used mostly as a squad player the following season but managed to get 21 matches in the league as Guangzhou yet again won the title. He also started both legs of the Chinese FA Cup final against Beijing Renhe, playing a big part as he scored once and assisted two in the decisive 4-2 win in the second leg to secure the cup title.

Guangzhou has won the league every year with Zhang in the squad and he has established himself as one of the first names to go down on the team sheet. His impressive performances could see European clubs come knocking once again when the transfer window opens, so perhaps a wider audience can enjoy one of Chinese football’s finest.