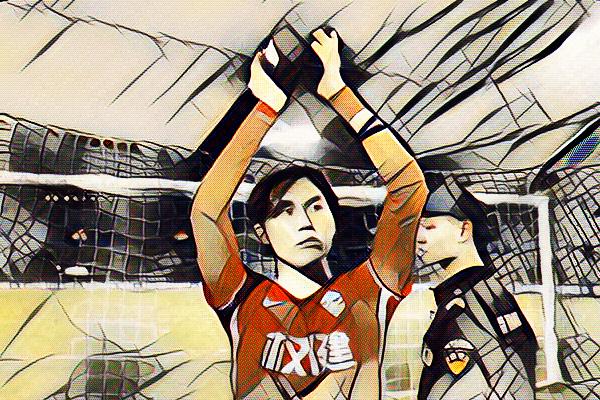 The jury is in and a verdict is given. Well, only if there were a jury. But anyway, Zhang Xiuwei, who crashed his Porsche and now has a criminal record on his file, is now found and confirmed by the Chinese Football Association guilty of age cheating. That is hardly surprising given the hard evidence is out there. But the precise crime is bleakly humorous with CFA characteristics.

The CFA did find him guilty, but of using an older age when he represented his old school, Tanghu Foreign Languages School in Chengdu. The first discipline document from the Chinese Football Association tells us that ‘After registrations, representations from the relevant units and player himself, and hearings’ they found him using the fake 1994 birth date to play. He will be suspended until 18 June. The ruling will enable Zhang Xiuwei to still be deployed as a U23 player for this season after the suspension expires and the next. But the very act of changing one’s age for the older is mystifying. Indeed it is very odd and extraordinary for Zhang Xiuwei, who commented on recent events as ‘I am already too tired’, to have attended, and played for a secondary school when he was 10 and ½. But the CFA made the ruling for the obvious reasons.

The first and the foremost reason is the CFA can’t possibly take the risk and confirm that Zhang was born in 1994. Otherwise they will put a big question mark on the national team. Zhang Xiuwei’s participation in the AFC U-19 Championship in 2014 means their achievement of reaching the quarter-finals will almost certainly be nullified if he were to be certified to be born in 1994. In addition to the humiliation of an annulment, which will more than disappoint the likes of Wei Shihao and Tang Shi, additional penalties against CFA and the national teams from the AFC are not entirely out of the realm of possibilities. The sting will carry over the career, if not life, of the 21/3-year-old, and possibly those of his then-teammates as well.

The second reason that the CFA decided he should be born in 1996 is the legal and political difficulty to contradict a court ruling. Like many other countries, the sports bureau attract most of the attention but not much love and have even less real power in relation to other parts of the government. And in China the autonomy, if not independence, of the courts have more or less become established in non-political-sensitive cases. To challenge the court was apparently a step too far to go; even the CFA had to demonstrate some pragmatism and settle for what it could unhappily get.

The third reason, less explicitly, is about wealth preservation. The closeness of the relationship between the government and wealthy club owners is never of much doubt. Even last season the relationship between the clubs and the FA became more frosty as the controversial refereeing, fines and other harsh discipline decisions mount, the rich owners are here to win. Quanjian Boss Shu Yuhui has just announced a plan to boost local talent similar to Guangzhou Evergrande’s ‘all-Chinese squad by 2022’. He was also elected a delegate to the National Political Consultative Conference. It would have been courageous for the CFA to deflate his net assets directly by devaluing one of his best players. Even better, news now come out that Guo’an and Evergrande are making proposals for the playmaker with even more money. Quanjian’s fortunes are soaring, but what about Chinese Football’s (already horrible) reputation?