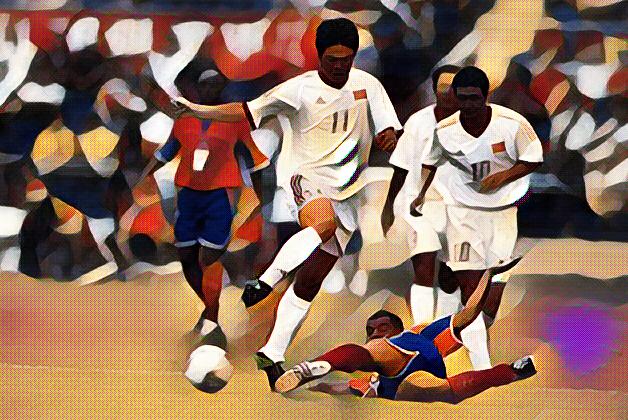 After advancing through the AFC Qualification phase with ease under Serbian coach Bora Milutinovic the Chinese came to the World Cup with high hopes of at least getting a win. The draw had been an okay one, they had gotten the awe-inspiring Brazil who would really test their defensive capabilities, and second timers Turkey and Costa Rica who had previously been to the 1954 and 1990 World Cups respectively.

Let’s see how Long Zhi Dui, or Team Dragon, got on shall we?

The first match in Gwangju was against Costa Rica, who as previously mentioned, had been to the 1990 World Cup. There they had advanced to the second round before being beaten by Czechoslovakia. The coach had worked wonders especially when considering the fact that he was only appointed 90 days before the first match. The coach you ask? Bora Milutinovic. So, it was a special match for more reasons than one.

China defended well for the first half and kept the score at 0-0 going into halftime. The second half started much as the first ended with China putting up a wall of defence, one could even say it was a great wall.

But on the hour mark, the wall cracked and Costa Rica followed in the Mongols footsteps and broke through the wall. After a lovely bit of play from the Costa Ricans, the ball fell to Rónald Gómez inside the penalty box and he made no mistake, sending the ball into the back of the goal.

Then after only four more minutes, Costa Rica got a corner. The ball was sent short to Gómez who turned away his marker and crossed the ball into the path of Mauricio Wright on the front post who only had to put his head to the ball to make it 2-0.

And that was all she wrote. China had opened their campaign with a defeat and in the next game awaited the toughest opposition you could possibly ask for. Brazil.

If the Costa Ricans had taken long to get through the Chinese defence, Brazil certainly had no problems.

Then, another 15 minutes later, Cafu made his usual run up the right-hand side and crossed for O Fenômeno, Ronaldo. But the legendary Brazilian didn’t win the header and the ball fell to Ronaldinho. He turned, looked up and crossed the ball in behind the Chinese defence where a waiting Rivaldo could pounce to make it 2-0.

Then, just before the break, Li Weifeng made Ronaldo’s shirt stand out like a sail in the wind and the Swedish referee Anders Frisk had no other option than to point to the penalty spot. Up stepped Ronaldinho. He sent the keeper one way and the ball the other and Brazil would head into the break with a comfortable 3-0 lead.

In the second half, the murderous pace from the Brazilians dropped and they seemed content with what they had. But one man was yet to get his goal. A long pass from Rivaldo found Cafu who once again crossed for Ronaldo, this time along the ground, and this time it found it’s intended target and Ronaldo could pass the ball into the net with no problem what so ever.

China were outclassed, outplayed and “outfootballed” in general in the 4-0 loss. Brazil gave them a lesson in how football was meant to be played that day, but the Chinese players could always say they had been up against one of the greatest teams in the history of the sport. As most know, Brazil went on to claim the title, beating Germany 2-0 in the final.

So, with China now knocked out of the competition as Costa Rica were sat on four points after drawing 1-1 with Turkey, they had nothing but pride, honour and the ability to say they won a match at the World Cup to play for. That should still be pretty strong incentives though.

But as the teams took the field the Chinese players seemed tired as their Turkish colleagues turned on the heat in an attempt to go through to the knockout stages, they could still advance on goal difference if they beat China and Costa Rica lost to Brazil.

And the Turks waisted no time at all and got the first goal after only six minutes through legendary striker Hasan Sas who pounced on a mistake in the Chinese defence and smashed the ball home from just inside the box. Then, just three minutes later the Galatasaray legend and centre back Bülent Korkmaz jumps the highest on the far post to beat his defender to a Sas cross and heads the ball into the net despite the best attempts to get the ball away from the Chinese defence and Turkey take a 2-0 lead. In the second half things would go from bad to worse as half-time substitute Shao Jiayi put his studs to the leg of a Turkish player and was sent off after only being on the pitch for 12 minutes!

With the numerical advantage and a two-goal lead the Turks never looked back and with Brazil beating Costa Rica comfortably all they had to do was hang on.

In the 85th minute, as China was trying to get their first ever World Cup goal but on tired legs, Turkey countered. Another cross from Sas was turned into his second assist when Umit Davala came in from the opposite wing and volleyed the ball along the ground and into the far side netting to give Turkey a 3-0 win and leave China with three defeats from three. Turkey would eventually go on to win the bronze medal, beating hosts South Korea in the Bronze Final.

So what did China learn from this?

Zero points. Zero scored goals. Nine conceded. If you just look at the cold hard stats this World Cup looks a disaster. But look beyond that and what you see is a team that tried its very best but were simply beaten by better teams and getting very close to scoring several times. This World Cup, however, sparked something else. It sparked the shift in the Chinese football landscape that has turned into the Chinese Super League we see today. It sparked the ambition to one day host a World Cup of their own and it sparked the hope that maybe, just maybe, they could get there and even win it somewhere down the line.

This one little taste of football heaven could be looked back at, many years from now, as what started it all as the most populous nation on this planet became the best in the biggest sport in the world.