The Cantonese Derby was the big match on Matchday 4 and it did not disappoint. The two Guangzhou teams, Evergrande and R&F, delivered some exciting end to end football.

Alan opened the scoring for Evergrande as he finished off a great counter-attack after only nine minutes.

Guangzhou R&F retaliated just before the break when they received a highly dubious penalty after what the referee determined was a handball on Zheng Long. R&F Manager Dragan Stojkovic couldn’t muster the courage to look as Eran Zahavi stepped up and calmly slotted the ball into the back of the net, sending the goalkeeper the wrong way.

It stayed level until the break despite some big chances for both teams. In the second half, R&F came back out clearly inspired by their first-half comeback and took the lead after 54 minutes, when Renatinho curled a free-kick over the wall and into the goal.

Both teams had plenty of chances and R&F could, and perhaps should have put the game to bed several times just before the end. As the clocked ticked over into added time a desperate Evergrande cross came in towards the back post and, in-between two R&F defenders, Gao Lin managed to get his head on the ball and rescue a point for the defending champions.

The other big match this week saw Shanghai SIPG take on Shandong Luneng on Friday, and it was Hulk and Shanghai who started best. It only took the Brazilian 10 minutes to open the scoring for the home team when he received the ball from Wu Lei and could slot it into the almost open goal, apart from two desperately flailing Shandong defenders. Lei had managed to tip the ball out of reach for the onrushing Luneng keeper and all Hulk had to do was not hit the two Shandong players, which he managed.

It was an even contest for the rest of the half as both teams had chances to score, but it wasn’t until the second half that the game really kicked into gear.

Papiss Cissé immediately brought balance to the books as he wasted no time in putting Shandong level. 35 seconds was all it took before the ball was in the back of the net. Cissé sent a shot from outside the box and it snuck its way past Yan Junling in the Shanghai goal.

Seven minutes from full-time Wei Shihao scored with a marvellous strike to give Shanghai the win. The shot touched goalkeeper Wang Dalei’s arm before hitting the bar and bouncing into the goal.

The other two Friday matches saw Beijing Guoan beat 10-man Henan Jianye 1-0, while former Chelsea player Ramires lost 2-1 with Jiangsu Suning at the hands of Chongqing Lifan, and now find themselves rooted to the bottom of the table, with only one miserable point from the four first matches.

The last clash between the big boys this weekend saw Hebei China Fortune welcome Shanghai Shenhua to the long and difficultly named Qinhuangdao Olympic Sports Center Stadium. Both teams wanted a win to keep in touch with the teams at the top and it was the guests who got off to the best start.

Fredy Guarin broke free and put Shanghai in front after 12 minutes. However, Hebei responded within two minutes as Aloisio headed the ball into the goal. Hebei took the lead just before the half-hour mark through Yin Hongbo with another header, and the home fans celebrated by “doing the Poznan”.

Aloisio got himself a brace just two minutes later as he capitalised on a defensive mistake and could easily slot the ball home into the empty net as Hebei went into half-time with a two-goal lead.

The guests came out for the second half determined to fight back and Giovani Moreno, assisted by Carlos Tevez, scored within the first three minutes. Any hopes of a comeback were stopped dead in their tracks, however, as Hebei scored just a minute later. An Ezequiel Lavezzi-free-kick found the head of Zhunyi Gao who denied any dreams of a Shanghai away win as he scored Hebei’s fourth of the night. Shanghai gave it another go but it wasn’t to be and the match ebbed out with a 4-2 win to Hebei.

The last match of Saturday saw Guizhou Hengfeng take on Tinajin TEDA in a 0-0 draw.

The first of the Sunday games between Changchun Yatai and Liaoning Whowin didn’t really get exciting until the final 35 minutes, where Liu Shangkun was sent off for a second yellow card as he gave away a penalty to Changchun. The penalty was converted by Szabolcs Huszti, but it didn’t take long, three minutes to be exact, before Assani Lukimya scored from a free kick to bring the scores level. The match ended that way and neither team will be too happy about it as both could have used a win.

Team of the week:

This team of the week come out in a fancy 3-5-2 formation and is quite Brazil-heavy.

In goal is Liaoning’s Shi Xiaton who made an impressive seven saves but couldn’t avoid letting in one goal in the 1-1 draw with Changchun. In defence, there are two goalscoring centre-backs in Zhunyi Gaom and Assani Lukimya. Zhang Linpeng finishes off our back-three as he provided the assist that gave Guangzhou Evergrande a draw in the Canton Derby. On the right w, ng we have Hulk, who makes the team for the second week in a row after a good display against Shandong. Renatino and Paulinho anchor our midfield. Renatinho scored a great free-kick for R&F while Paulinho, as usual, bossed the midfield and is also in the team for the second week running. On the left hand side we have Ezequiel Lavezzi, who had two assists in Hebei’s 4-2 win. Oscar is the link between midfield and attack. He also had a great match against Shandong. Our strike partnership this week is Erhan Zahavi, the man who scored the penalty in the 2-2 draw between R&F and Evergrande, and Aloisio, who scored twice this weekend. 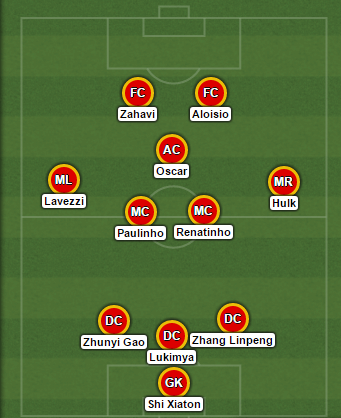