Match week 3 saw a new club at the top of the pile – Shandong Luneng. Shandong eased to a comfortable 2-0 victory over listless Changchun Yatai and favourable results elsewhere has propelled them to the top. It was former Newcastle man Papiss Cisse who scored both goals, both in the second half. Cisse opened the scoring in the 59th minute and sealed victory late on.

Oscar and Hulk led Shanghai SIPG dropped out of the top-4 after a narrow defeat to defending Champions Guangzhou Evergrande. H. Yu opened the scoring early on and Alan doubled the lead at the 24-minute mark. It looked as if Guangzhou will hand Shanghai their first defeat of the season but the latter staged a remarkable comeback and levelled things up through goals from Elkeson and Hulk. But the match was far from over and in the 80th minute, a penalty was awarded to Guangzhou. Ricardo Goulart made no mistake from the spot and scored the winner for the Champions and pushed them up to 3rd place.

The Capital club won bragging rights in the season’s first China Derby with a late win over Shanghai Shenhua. Turk Burak Yilmaz opened the scoring for Beijing in the 37th minute but relinquished it just minutes later. Yilmaz scored again in the 87th minute and won the match for Guoan. With the win, Beijing moved into the top half of the table.

Tianjin TEDA secured a comfortable 2-0 win over Chongqing Lifan with former Chelsea player John Obi Mikel opening the scoring early in the second half. The result was sealed late on with a Milovic own-goal. The result pushed Tianjin up into 9th place and just 2 points off the Champions League spot.

The early-season struggles for Jiangsu Sunning continued as they slumped to a crushing 3-1 defeat at the hands of Liaoning Whowin. Liaoning opening the scoring at the half-hour mark through a penalty from Captain Chamanga. But Jiangsu equalised shortly before half-time. Ujah and Yang secured the victory for Liaoning with goals in the 69th and 87th minutes.

10-men Tianjin Quanjian secured a comfortable 1-0 win over Henan Jianye with a goal from Yiming Liu early on. The goal scorer was then sent off deep into second-half stoppage time for a second bookable offence in the space of minutes.

Heibei China also secured a victory over Guizhou through a 1-0 win. It was a comfortable win with the Heibei dominating possession and stifling the opposition attack. Guizhou had a man sent off for a second booking in the 71st minute. The win propelled Heibei into 6th place just a point off the last Champions League spot.

Guangzhou R&F maintained their 100 percent record in the infancy of the new season with a 1-0 victory over Yanbian Funde. But the win was anything but straight forward and comfortable and Guangzhou only just held on to Israeli Zahavi’s goal in the 74th minute. To Yanbian’s credit, they showed plenty of fight and even struck the woodwork in second half stoppage time. Guangzhou are the only team yet to concede in the CSL this season. 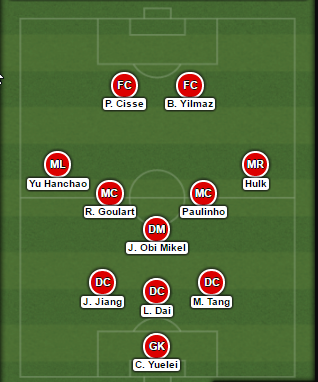 Guangzhou R&F’s Yuelei earns his place in goal after another amazing display in goal. The defence is dominated by Guangzhou R&F’s centre backs. They have not conceded a single goal this season and were efficient in doing their job this week. Accompanying them is Shandong Luneng’s L Dai.

In the centre of the park is goal scorer John Obi Mikel. He was superb all day and pulled his team to victory. Ahead of him his Hulk who was again amazing with a goal against Guangzhou Evergrande. Guangzhou’s Paulinho continued his impressive form in Evergrande’s vital victory over Shanghai SIPG. An assist and a goal has seen Ricardo Goulart earn a place in the team. Guangzhou Evergrande’s Yu Hanchao was superb down the left for Guangzhou and walks into the team this week. Both the front men Burak Yilmaz and Papiss Cisse scored two goals over the weekend to book their place in this week’s team of the week.