Guangzhou Evergrande’s surprise defeat at the half way mark in the League saw the lead at the top cut to a solitary point. In other matches, Shanghai Shenhua ran riot scoring 8 goals against hapless Liaoning Whowin.

The surprise of the week was Fabio Cannavaro’s Tianjin Quanjian defeating Guangzhou Evergrande 4-3. It brought a run of 10 wins on the trot to an end. Yu Hanchao provided the breakthrough for the six-time reigning Champions but a poor showing in the second half saw Tianjin score four times. Ke Sun and Kyung Won Kwon turned the scoreline around just six minutes into the second half. Alexandre Pato doubled Tianjin’s advantage before Paulinho pulled one back. The two-goal cushion was restored by a Yongpo Wang penalty nine minutes from time before Paulinho got another goal.

Taking full advantage of the League leader’s slip up, Shanghai SIPG secured a 1-0 victory away at Jiangsu. Jiangsu played with a lot of heart and were unlucky not get any points. Elkeson ended up being the difference as Shanghai converted one of their three shots on target. Jiangsu had 14 shots but just three on target. Jiangsu remain rock bottom as their season goes from bad to worse.

Shanghai Shenhua rode on the back of birthday boy Freddy Guarin’s brace to thrash Liaoning Whowin by 8 goals to 1. The Colombian also extended his contract earlier in the day. A double from Obafemi Martins and Guarin before half-time accompanied by goals from Giovanni Moreno and an own goal from Xiaotian Xi saw Gus Poyet’s men go to the break with a six-nothing lead. Further goals from Moreno and Zhang Lu completed the rout. Anthony Ujah scored the consolatory goal for Liaoning.

Guangzhou R&F suffered a 4-3 reverse at the hands of Chongqing Lifan. Goals from Alan Kardec, Qing Wu, Fernandinho and Jing Feng was enough to upstage Guangzhou. An Eran Zahavi brace along with a Miao Tang goal was not enough to steal a point. It was a victory against the run of play as R&F dominated for long durations of the game.

Henan Jianye and Tianjin TEDA played out a goalless draw and so did Hebei China and Shandong Luneng. The third-fourth clash failed to provide goals as Hebei all but dropped out the Championship race.

Bottom side Yanbian Funde emerged 2-1 winners and secured a vital win in their fight against relegation. Though still in the bottom two, Yanbian are just 2 points from safety.

Yan Junling, Shanghai SIPG – In a match week where you would rather not be a goalkeeper or defender, Shanghai’s Yan Junling performed admirably and kept a clean sheet.

Miao Tang, Guangzhou R&F – Scored a goal and was one of the best players on his team. Let nothing through at the back.

Ricardo Carvalho, Shanghai SIPG – A vintage display from the Portuguese. Turned back the clock and almost singlehandedly stopped everything Jiangsu threw at Shanghai.

Kyung Won Kwon, Tianjin Quanjian – A beast at the back. Superb in the second half and scored a goal that gave his side breathing space against the League leaders.

Fan Xiaodong, Changchun Yatai – Scored the odd goal in a 2-1 victory and solid at the left side of the defence.

Paulinho, Guangzhou Evergrande – An impressive individual performance that included a brace. One of the few bright spots from that second half against Tianjin.

Yongpo Wang, Tianjin Quanjian – An inch perfect display that powered his side to a 4-3 victory against the League leaders.

Fernandinho, Chongqing Lifan – Scored and was vital in his side’s 4-3 victory over Guangzhou R&F.

Obafemi Martins, Shanghai Shenhua – Part of the Shenhua attacking trio that ran riot against Liaoning. Scored a brace and was actively involved throughout the match.

Freddy Guarin, Shanghai Shenhua – Part of the Shenhua attacking trio that ran riot against Liaoning. Scored twice and caused all sorts of trouble to the Liaoning defence.

Giovanni Moreno, Shanghai Shenhua – Part of the Shenhua attacking trio that ran riot against Liaoning. Another Shanghai brace. Led from the front as Captain and was arguably his best display since making the move to China. 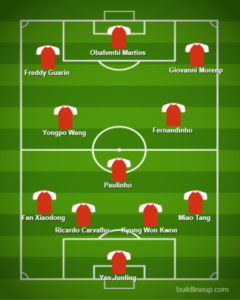