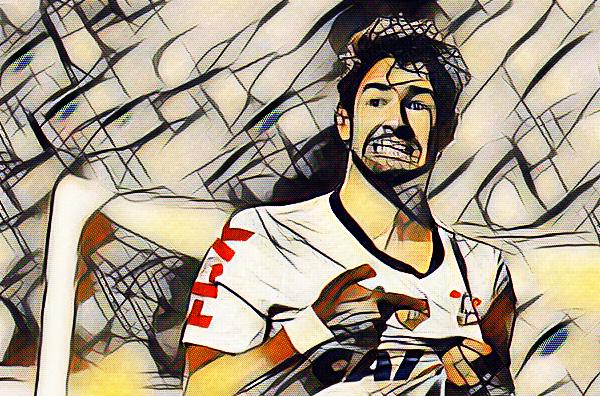 Alexandre Rodrigues da Silva, or Alexandre Pato spent his youth career at Internacional. He broke into the first team with a debut in 2006 aged just 16. Before his debut, he was part of the Internacional sub-20 squad that took part in the Campeonato Brasileiro sub-20. Despite being about 4 years younger than most other players, Pato emerged as top scorer. Three months later he made an unforgettable debut as he scored his first professional goal after just a minute. He contributed with a couple of assists and helped beat Palmeiras 4-1.

Pato was part of the Internacional squad for the 2006 FIFA Club World Cup. Here he broke Pele’s long-standing record of being the youngest scorer in a FIFA organised competition. The highlight of Pato’s time at Internacional was winning the Recopa Sudamericana.

Pato’s performances attracted international attention and was the transfer target of many European clubs. But it was European Champions AC Milan that signed him on 2nd August 2007. Despite this, he was not an official AC Milan player until January 4th because of rules regarding the transfer of non-EU minors.

Pato made his Serie A debut against Napoli and marked the occasion with a goal. He finished the 2007-08 season with 9 goals in 20 appearances. The 2008-09 season was even more successful for the young Brazilian. In January he had a run of 6 goals in 4 games including a winner against Fiorentina. Despite his tender age, he finished as top scorer for AC Milan that campaign finishing with 19 goals.

Pato began the 2009-10 season strongly. He scored 2 goals in the opening Serie A match of the season. He scored 2 second half goals at the Bernabeu as Milan beat the mighty Real Madrid 3-2. Pato became the first Brazilian to be awarded the Serie A Young Footballer of the Year. As the campaign progressed, Pato became injured causing him to play just 20 games.

Pato once again was in great form as he started the 2010-11 season but missed 6 weeks after injuring his hamstring for a third time inside a year. He came back strongly and on February 20th scored a remarkable goal. Pato unleashed a shot after dribbling past 2 defenders. The balled went in off the upright. He continued his good form and scored a brace in the Milan Derby.

The 2011-12 season was a huge disappointment as he missed most of the season with left thigh injury. The next season did not start well for the Brazilian as he suffered another injury in just the third training session of the season. With his progress continuously hampered by injuries, he returned to Corinthians for a fee of £12.18m.

At Corinthians, Pato maintained his reputation of scoring on debuts. But as the season progressed, he was intermittently criticised by his own fans for missing open goals. The lowest point of his season was a failed ‘Panenka’ down the middle in the Copa do Brasil.

On 5th February, Pato completed a loan switch to Sao Paolo. He made the switch because he did not fit into the new Corinthians coach’s style of play. His tenure at Sao Paolo was not sublime but he didn’t disappoint either as he finished with a record of 19 goals in 59 goals.

Without offers after the end of the loan, Pato returned to Corinthians. There he turned down a move to Chinese side Tianjin Quanjian and sought a return to Europe. He completed a move to Chelsea in the Premier League but it turned out to be huge disappointment as he made just 2 appearances. But he continued his habit of scoring debut goals.

On 26th July 2016, Pato switched to Spanish side Villarreal. He scored and assisted in the first Europa League fixture of the match.

On 30th January 2017, he completed a switch to newly promoted Tianjin Quanjian for a fee of £15m.