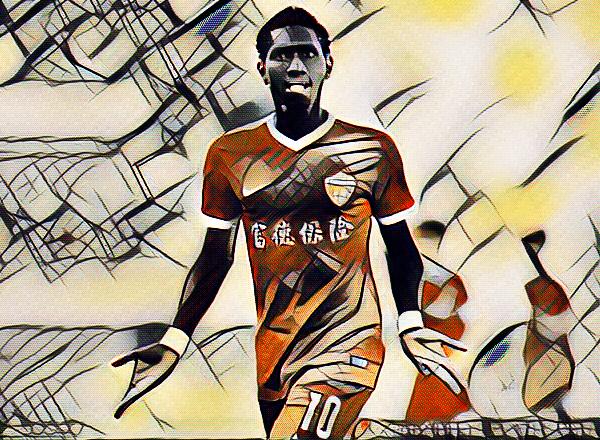 Gambian international Bubacarr Trawally, better known as Steve, is not one of the biggest earners in the Chinese Super League but the 22-year-old is one of the “uncharacteristic” players in China, as one of a few people to make the move to China at an early stage in his career.

Having started his career at Real de Banjul in The Gambia’s capital Banjul he made the move to China and Hangzhou Greentown in January of 2015.

The transfer was not well received back in his homeland as the Gambians felt like such a small club in the still “small” Chinese Super League was not the best destination for one of The Gambia’s biggest talents.

Today Steve, who has three caps for The Gambia, would recommend moving to the CSL or even League One for any young African player playing in Africa.

While Hangzhou certainly saw potential in him he had to stand in line behind players like Davy Claude Angan and the management team in Greentown thought it would be better for Steve to go out on loan.

Yanbian Funde acquired his services, then playing in League One, and he found immediate success.

He scored 17 goals in 26 league appearances and added to that with seven assists. Yanbian won the league title and got promoted. But Steve was not supposed to be at Yanbian in the first place according to himself.

“I have said this several times and I will say it again! I honestly was not supposed to play for Yanbian, it was another team in League One, Wuhan Zall, but I think they didn’t have the confidence in me and decided not to sign me, that’s why I’m happy I got promoted to Super League with Yanbian and they stayed in League One,” he revealed to Wild East Football in 2016.

He signed permanently for Yanbian after the promotion in 2015 and his first season in the CSL saw him continue his good form. He ended joint top scorer for the club with eight goals, alongside Koreans Seung-Dae Kim and Bit-Garam Yoon as Yanbian secured safety with ease, finishing all the way up in ninth place, but only five points of the last relegated team, his old teammates at Hangzhou.

This season has seen Yanbian feel the “second-season syndrome” as they currently sit second from the bottom with only six points in eight games. Steve has only scored twice this season, but last season it took him nine games to get going, this season he only needed five.

Yanbian fans will be hoping he can start scoring like the League One days to keep them up.