This week of matches threw up a lot of surprises while 6-time defending champions Guangzhou Evergrande continued their run of wins and extended their lead at the top to five points.

Defending Champions and league leaders Guangzhou Evergrande picked up their fifth consecutive win on the trot. Inspired by the performance of right-back Linpeng Zhang, Guangzhou came out with a narrow 1-0 win over Changchun Yatai. Paulinho set up the goal and produced another masterclass in the centre of midfield. Anzur Ismailov was as good as he could be but couldn’t prevent another defeat for Changchun.

The other Guangzhou’s bad run of form continued, this time with a draw against Pellegrini’s Hebei China. Dubbed as the battle of the strikers with Guangzhou’s Eran Zahavi and Hebei’s Ezequiel Lavezzi going head to head. Eventually, it was the goals from these two players, just a minute apart from each other, which gave us the 1-1 result.

Another title contender Shandong Luneng bit the dust. The result was an unexpected defeat against then-winless Jiangsu Suning. The three points enabled Jiangsu to climb out of the relegation places for the first time in a long while. An extra time goal from Alex Teixeira completed the come-from-behind-victory. Earlier on, Diego Tardelli put Luneng ahead before a Ramires goal made it all square once again. Shandong had Tong Wang sent off midway through the second half.

Shanghai SIPG was the only one of Guangzhou’s title contenders to claim all three points in this pivotal weekend. Like in Evergrande’s case, Shanghai was powered to victory by a man of the match performance, including a goal coming from right-back. Huan Fu led his team to victory as Oscar had a rare blip.

In the battle between the promoted sides, Tianjin Quanjian travelled to Guizhou, hoping to bounce back from three draws and a defeat. But, the bad run of form continued as Nikicia Jelavic scored a brace to secure a 2-1 victory for Guizhou. Alexandre Pato scored for Cannavaro’s Quanjian.

Liaoning Whowin rode on the back of goals from Anthony Ujah and James Chamanga to secure a crucial 2-1 win over Chongqing Lifan. Jie Ding got on the scoresheet for Lifan.

Beijing Guoan returned to winning ways after a reverse last time round. An added bonus was the return to form of Turk Burak Yilmaz. Yilmaz scored two and Steve got on the scoresheet for Yanbian Funde as the latter lost 2-1.

The last match of the week saw Shanghai Shenhua play out a boring 0-0 draw against Henan Jianye.

Nikicia Jelavic is our Power Player of the Week. He scored a brace in Guizhou’s 2-1 victory over Tianjin Quanjian. 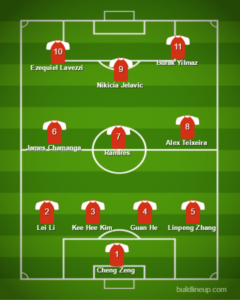 Cheng Zeng, Guangzhou Evergrande – Was outstanding in goal for the league leaders. Was vital in Guangzhou’s defense of the narrowest of 1-0 leads.

Linpeng Zhang, Guangzhou Evergrande – Gets into the team just ahead of Shanghai’s Huan Fu. Scored the eventual winner and helped shore up the defense to defend the 1-0 lead.

Guan He, Shanghai SIPG – Was a crucial part of the defense that defended a 1-0 as Shanghai kept up the pressure at the top.

Alex Teixeira, Jiangsu Suning – Scored a goal and put in a massive performance for Suning as they eased relegation fears, at least temporarily.

Ramires, Jiangsu Suning – Put in a dominant display and got his goal.

James Chamanga, Liaoning Whowin – Another impressive performance including dispatching the penalty that eventually turned out to be the winner.

Burak Yilmaz, Beijing Guoan – Scored a brace and helped his team overturn a 1-0 deficit. An eye-catching return to form.

Nikicia Jelavic, Guizhou Zhicheng – Almost single-handedly won the game for struggling Guizhou. Scored a brace and could have had more.