League leaders and six-time defending Champions Guangzhou Evergrande continued their excellent run of results with a sixth consecutive victory in the league. Jiangsu could not follow up their first win of the season with another good performance and remain rooted to the bottom of the table. Guangzhou took the lead in the 12th minute through an Alan goal. It was again the Brazilian connection as the Paulinho was the provider. Shortly before the break, Alan nabbed his second again through the Brazilian link-up. Jiangsu managed to pull one back through Pengfei Xie but it was not enough despite Guangzhou being reduced to 10 men late on.

Second place Shanghai SIPG refuse to blink and kept up the pressure at the top with another victory, this time in the Shanghai Derby over Shenhua. The bad-tempered match saw 8 yellow cards, four apiece. Visitors SIPG took the lead through Lei Wu. But the lead lasted just seven minutes as Shenhua equalised through Obafemi Martins. The remained the same until the final minute of the stipulated 90. Hulk popped up and scored the winner and made it 2-1 SIPG. But the drama was far from over, as Lei Wu was booked for taking too long to leave the field after being taken off by Andre Villas-Boas. Shenhua’s Yunqiu Li made it 3-1 SIPG with an unfortunate own goal.

Guangzhou R&F went four winless this week after giving up a two-goal lead against Beijing Guoan and drew 2-2. The first half was fairly unentertaining but the match turned on its head in the second half with two Guangzhou goals in the space of two minutes through Eran Zahavi and Zhi Xiao. But Beijing made inspired changes as substitute Chiming Zhang halved the deficit 10 minutes after coming on. Four minutes into extra time, Chiming Zhang turned provider as Song Boxuan levelled things up with barely any time left to play. The result saw Guangzhou slip out of the top 3 after a very long time.

Another high-flying team Shandong Luneng dropped points this time against struggling Yanbian Funde. Steve opened the scoring for Yanbian before Diego Tardelli levelled things up for Shandong. It remained 1-1 as Shandong continued their downward spiral as they now have just 2 wins in their last five matches.

Alexandre Pato continued his goal-scoring form against Chongqing Lifan. It turned out to be the only goal in the match as Tianjin Quanjian consolidated their position in the top half of the league table.

The match between Tianjin TEDA and Changchun Yatai ended in a 1-1 draw with Brown Ideye and Jie Sun scoring for the two teams. Changchun could have won it late on but Szabolcs Huszti missed a penalty and both team had to share the points.

Heibei China moved into the Champions League places with a 2-0 victory over Liaoning Whowin. Ezequiel Lavezzi continued his good form of late with an assist. It lead to the first goal of the match. It was scored by Hang Ren inside the first ten minutes. It was fair sailing for Heibei who all but secured the win with the second goal in the second half through Gui Hong.

Guizhou Hengfeng relied on in form Nikicia Jelavic to score late on in the match and secure a third win in four matches for the newly promoted side. It condemned Henan Jianye to their 5th defeat of the season and left them precariously close to the relegation places. 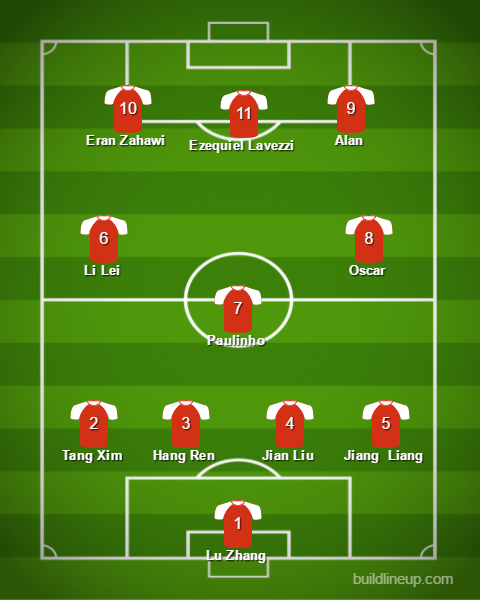 The Player of the Week is Alan from Guangzhou Evergrande. Scored twice and helped his team maintain and consolidate the lead at the top of the table.

Lu Zhang, Tianjin Quanjian – Had a superb game and kept a clean sheet. Was not afraid to play the sweeper role and came forward to clear the ball. Made a lot of vital saves.

Jiang Liang, Guizhou Zhicheng – Played a wonderful game at right back and kept a clean sheet. Effective going forward and impressed in his team’s win.

Jian Liu, Guangzhou Evergrande – Kept the defence organised after his team got reduced to 10 men. Did not put a foot wrong and impressed.

Hang Ren, Heibei China – Marshalled the defence, kept a clean sheet and even got onto the scoresheet.

Tang Xim, Guizhou Zhicheng – The second fullback from Guizhou in our team of the week. Solid at the back and excellent going forward, display merits a TOTW selection.

Oscar, Shanghai SIPG – Despite not scoring and assisting, Oscar had another amazing performance for Shanghai.

Paulinho, Guangzhou Evergrande – Another impressive performance from the Brazilian. Had an assist and dominated proceedings in the middle of the park.

Li Lei, Beijing Guoan – Scored and had an impressive outing. His return to form will have pleased the management and fans alike.

Alan, Guangzhou Evergrande – Scored a brace and helped his team consolidate the lead at the top of the table. An impressive performance.

Ezequiel Lavezzi, Heibei China – Another selection in the Team of the Week for Lavezzi. His uptick in form has seen Heibei surge into outside Championship contention. Had an assist and was caused all sorts of problems for the opposition defence.

Eran Zahavi, Guangzhou R&F – Helped his team race into a two-nothing lead early on in the second half. Impressive yet again from the Israeli.