The biggest match of the weekend was Hebei’s visit to Shanghai to face Oscar and Co. Starting the match four points behind the home team, a win would put Heibei into outside Championship contention. But, it turned out to be a day to forget for Manuel Pellegrini and his team as André Villas-Boas’ team ran out 3-0 winners.

Heibei were slow out the gates but had a spell after 10 minutes where they could have easily scored. However, after that, it was all Shanghai as Oscar produced another master class to continue his good start in China. Hebei’s marquee player Ezequiel Lavezzi had another day to forget as goals from Wenjun Lu, Lei Wu and Oscar ensured a comfortable victory for the Red Eagles.

Jiangsu Suning continued their miserable start to the season as they crashed to the bottom of the table with a 2-1 reverse against Guangzhou R&F. Both teams threw punches and Jiangsu drew blood with an Alex Teixeira goal after 35 minutes. But R&F were clinical after the restart and Eran Zahavi finished off passes from Lu Lin and Zhipeng Jiang. Jiangsu’s Ramires looked off the pace and is clearly still adjusting to the CSL.

Champions Guangzhou Evergrande kept up the pressure at the top of the table with a 2-1 win over Liaoning Whowin. Guangzhou were back to their dominant selves as Liaoning never really threatened. But, a lapse in concentration led to a Lukima goal shortly after Guangzhou had a man sent off. Ricardo Goulart and Lin Gao scored in the space of seven minutes to turn it around and the ten men held on for a comeback win.

The Capital Club welcomed newly promoted Tianjin Quanjian in what was billed as an exciting match before kick-off. Both teams were equally bad as goals from Ke Sun and Lei Li resulted in a 1-1 draw. Beijing put pressure on the visitors towards the end but Fabio Cannavaro’s team held on of a valuable point.

Tianjin’s second team, TEDA F.C, ran out comfortable 3-1 winners against dismal Yanbian Funde. Three goals in the space of 14 minutes secured the result. Bubacarr Trawally did pull a goal back in Yanbian’s best period of the match. Tianjin TEDA had an incredible 26 shots on goal.

Gus Poyet’s Shanghai Shenhua rose up to 5th position with a 2-0 victory over promoted side Guizhou. Cao Yunding marked an impressive display with an assist for Freddy Guarin’s opener. A second goal before half-time by Obafemi Martins secured 3 points for Shenhua.

Changchun Yatai finally won a match at the sixth time of asking, beating Henan Jianye. They dominated against Henan Jianye. Changchun had a solitary goal for all their efforts. Long Tan scored Changchun’s winner.

Shandong Luneng dropped points in a week in which all the teams at the top won. They were dominating and enjoyed the lion’s share of possession (61%) but could not find the winner. They were trailing to a Fernandinho goal before Graziano Pelle equalized. Pelle was superb but couldn’t find the winner as his team lost ground in the title race.

This week’s team lines up in a 4-4-2 diamond formation. We had amazing performances all around. But it was the Brazilian Oscar who was the Man of the Week. 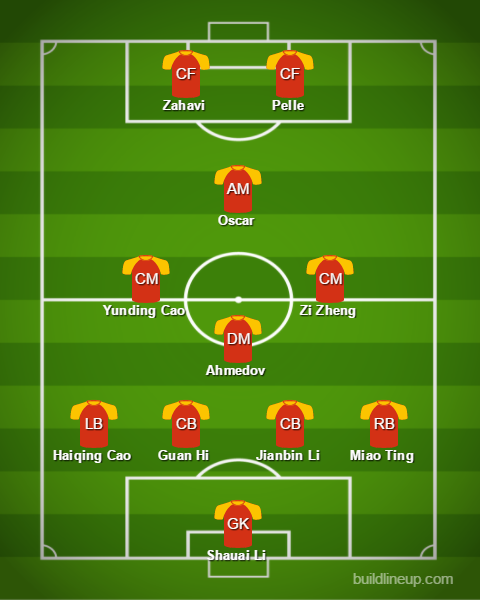 Shauai Li, Shanghai Shenhua – Made 3 key saves and punched out a couple of balls. Was comfortable in the air.

Miao Ting, Guangzhou R&F – Put in a complete performance at right back. Made a couple of clearances, made 2 tackles and 4 interceptions. 3 of his 5 crosses found a teammate and had a 100% dribble success.

Jianbin Li, Shanghai Shenhua – Made 8 clearances, blocked a shot and made a tackle. Won an impressive 4 of 6 duels.

Guan He, Shanghai SIPG – Made 4 clearances and made a key interception. Won 3 out of 4 duels.

Haiqing Cao, Jiangsu Suning – The only good performance for Jiangsu. Made 2 clearances, made an interception and a tackle. Won 6 out of 9 duels.

Odil Ahmedov, Shanghai SIPG – Completed an incredible 92% of his passes in midfield. Was successful in both his dribbles and even had a shot on target. Dominated midfield and set the stage for a big Shanghai win.

Zhi Zheng, Guangzhou Evergrande – Completed 88% of his passes. Won half of his duels and was never dispossessed. Also made 3 key interceptions in the center of the park.

Yunding Cao, Shanghai Shenhua – Had a decent game at the left side of midfield. Made a couple of chances and was always a threat going forward. Put in 5 crosses out of which 3 found a teammate.

Oscar, Shanghai SIPG – Had a 91% pass completion rate. 9 out of 10 long balls were to a teammate. Won a mindboggling 12 duels in 22 attempts. Also helped out at the back with 3 clearances.

Eran Zahavi, Guangzhou R&F – Took 7 shots out which 3 were on target. Scored 2 goals.

Graziano Pelle, Shandong Luneng – Completed all of his 9 dribbles. Scored. Won 15 out of 26 duels.