This match week is probably the most compelling one of the season (so far). None of the top 3 managed to get a point. The relegation fight was thrown wide open as the clubs set themselves up for a grandstand second half of the 2017 season.

If Shanghai were to eclipse Guangzhou and leapfrog the Canton club into first place, this was the opportunity. With their rivals slipping up, a win for Shanghai would have opened up a 2 point lead at the top. But Changchun Yatai had other plans. In a stunning first half display, Changchun scored thrice in the space of 7 minutes to stun Andre Villas-Boas’ men. Szabolcs Hustzi, Zhe Jiang and Long Tan were the goalscorers. Though things were better for Shanghai in the second half, they conceded the fourth goal to Odion Ighalo. Xiaofei Zhang’s own goal and Shenglong Li scored the consolatory goals for Shanghai.

League leaders lost their second consecutive game after going on a 10 game winning run. Beijing put in a flawless performance to beat the 6-time Champions by two goals to nothing. Roger Schmidt’s side got off to the perfect start as Johnathan Soriano put the hosts ahead in the first minute. Soriano was the goalscorer once again as Beijing secured a 2-0 win. It was the first win of the Roger Schmidt era.

Another big shock came on Saturday with Henan Jianye, sitting third from bottom heading into the matchday, beating Hebei China, sitting third in the table, by the odd goal in 5. Two goals in the space of 5 minutes gave Henan a two-goal cushion. Bassogog scored the second while the first was an own goal. Bassogog had his second of the night in the second half and gave his side a 3-0 nothing advantage. Despite Lavezzi scoring twice late on to set up a nervy finish to the game, Henan stayed firm and secured an important victory.

After scoring 8 times last time round, Shanghai needed two goals in the last 10 minutes from Giovanni Moreno to share the spoils with Jiangsu Suning. Capello’s side lead 2-0 at the break through goals from Xi Wu and a penalty from Alex Teixeira. Jiangsu were under immense pressure in the final 20 minutes of the game and buckled late on. Moreno scored the equaliser in the 94th minute.

Guizhou Zhicheng beat Liaoning Whowin by a solitary goal from the spot by Nikicia Jelavic. Guizhou consolidated their position in mid-table as Liaoning stare a relegation battle in its face.

Chongqing Lifan hit four past a Yanbian side that exchanged places with Jiangsu Suning. An Alan Kardec brace along with goals from Fernandinho and Nan Song secured the comprehensive victory. The defeat means that Liaoning have lost their last 5 fixtures and sit just 3 points ahead of 15th placed Jiangsu Suning.

Guangzhou R&F’s wretched run of form shows no signs of abating as the Canton side suffered a 2-1 reverse against Tianjin Quanjian. Quanjian sit 5th and are firmly in contention for the Champions League spots. It took a 90th-minute winner from Axel Witsel for Fabio Cannavaro’s side to emerge with all three points.

The other club in the Champions League contention Shandong Luneng won 2-0 at Tianjin TEDA. Jin Jingdao and Diego Tardelli got onto the scoresheet for Shandong.

Su Boyang, Guizhou Zhicheng – First entry of the season for Boyang and it was deserved. Played the sweeper-keeper role flawlessly and did his bit to earn three points for his team.

Yand Yu, Beijing Guoan – Made several key interceptions and blocks to keep Guangzhou out of the scoresheet. Even provided an assist.

Dong Lu Sui, Chongqing Lifan – Made a number of vital defensive plays to help his side to a clean sheet. Had a chance to score.

Szabolcs Huszti, Changchun Yatai – Scored twice against the second place side. Part of almost everything good Yatai did. Brilliant performance.

Giovanni Moreno, Shanghai Shenhua – Second consecutive week with a brace sees Moreno walk into the Team of the Week for the second week in the running.

Axel Witsel, Tianjin Quanjian – Back in the headlines, this time for the good reasons. Scored the winner late in the match to break Guangzhou’s hearts.

Ezequiel Lavezzi, Hebei China – Scored twice late on to give his side a chance of stealing a point. Put in a very good overall performance.

Alan Kardec, Chongqing Lifan – Scored twice and had an assist against Yanbian Funde.

Alex Teixeira, Jiangsu Suning – Scored from the spot against Shenhua. Made several key plays and was positive all throughout the match. 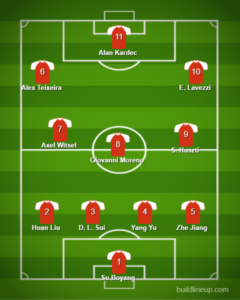